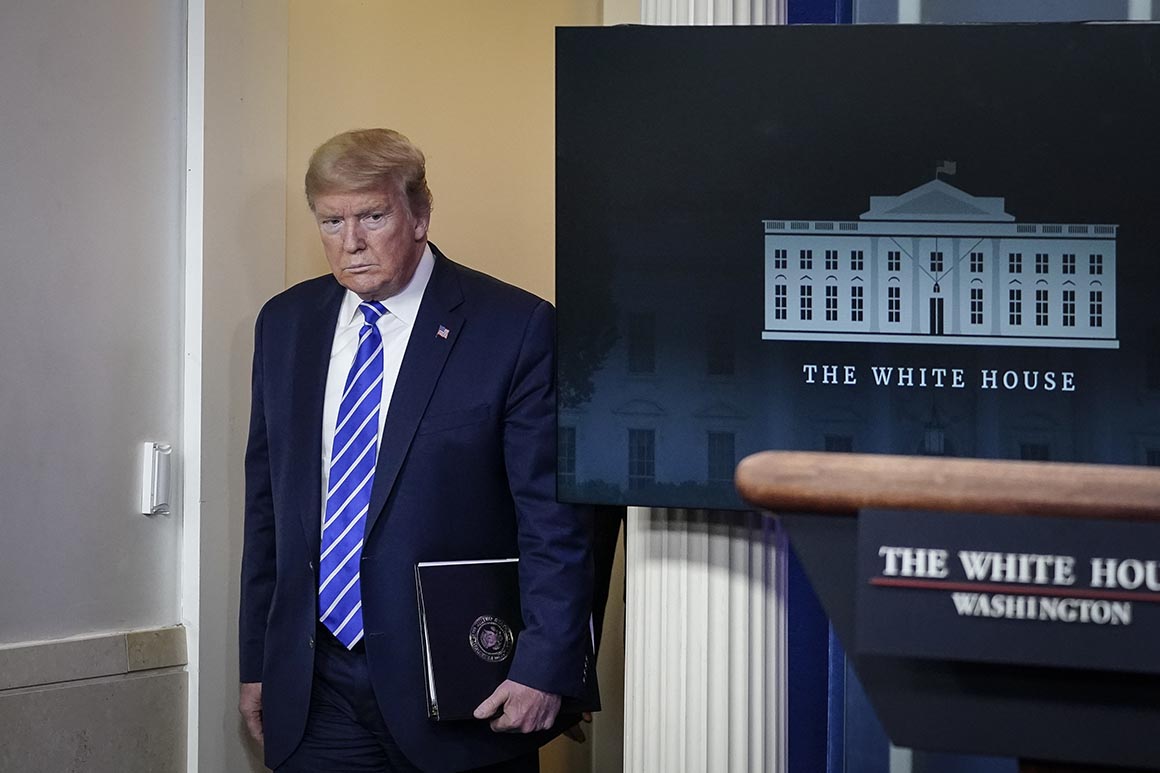 Senior Republicans and President Donald Trump’s campaign are wrestling with how to best position him for November as the coronavirus poses a grave threat to his reelection.

With Trump’s poll figures sagging in key battleground states six months out from the election, the Republican National Committee has launched a massive effort to reach some 20 million swing voters to make an affirmative case for his performance. But Trump campaign officials are taking a different approach: Rather than devoting resources to boost Trump’s numbers, which haven’t moved materially since he was elected, they want to go scorched earth against Joe Biden.

Over the past few weeks, the Trump campaign has unveiled a digital ad savaging Biden over his relationship with China. It also launched a weekly online program dubbed "War Room" in which presidential advisers take aim at the former vice president on an array of issues. The campaign has also weighed a major TV offensive going after Biden.

The deliberations illustrate how the highest ranks of the Republican Party are grappling with the uncertainty the coronavirus crisis has injected into the race — and how best to prepare for a general election that looks nothing like what they’d been anticipating.

There are indications that Trump’s response to the crisis is taking a toll. His campaign’s internal polling shows that the president’s initial bump in managing the virus has dissipated, according to a person familiar with the results. An NBC/Wall Street Journal poll released over the weekend revealed that voters thought Biden would do a better job than Trump in managing the virus by a 9-point margin, and new surveys show Trump trailing Biden in Florida, Michigan and Pennsylvania.

Alarm about Trump’s standing is trickling to down-ballot races. A Fox News poll released earlier this week showed the GOP candidate trailing 13 percentage points in the Michigan Senate race, a contest the party has been targeting aggressively.

“Historically, it is important for the president to be competitive in battleground states not just for his own race, but to enable an environment that is strong enough for statewide and down-ballot candidates to have the footing they need to run successful campaigns," said Nick Everhart, a veteran Republican strategist.

The voter outreach has become a singular focus of the RNC over the past month. Reading from prepared scripts in phone calls, party officials and volunteers have highlighted Trump’s decision to ban travel from China and his work with Democrats on the crisis. They have also left voicemails from Lara Trump, the president’s daughter-in-law. Using the party’s massive data machine, Republicans are targeting the battleground voters seen as most likely to be swayed and likely to decide the election.

The committee has also begun a seven-figure digital advertising blitz spotlighting praise for the president from Democratic governors Gavin Newsom of California and Andrew Cuomo of New York. Rarely has the committee spent so heavily on ads so early in an election year.

White House counselor Kellyanne Conway, Trump’s 2016 campaign manager, has also advocated for playing up Trump’s accomplishments in responding to the crisis. She opposed the reelection campaign’s idea to wage a TV advertising offensive against Biden on China.

Others say there’s little public appetite in a slash-and-burn campaign at a time when Americans are suffering. Former House Speaker Newt Gingrich, a Trump adviser and ally, said the president should wait until the late August convention to begin a full-fledged campaign and instead focus on dealing with the crisis.

Dealing with it effectively, he contended, would virtually cement Trump’s reelection.

“His best strategy is to follow FDR’s example and be Dr. Defeat the Virus and then Dr. Create Jobs and Prosperity,” Gingrich said.

Yet campaign officials see reason to begin nuking Biden, especially as the former vice president ramps up his attacks. Liberal outside groups have spent millions of dollars on TV ads in battleground states going after Trump. The former vice president’s campaign, meanwhile, recently released a web video charging that Trump left the country “unprepared and unprotected” — a spot that even some Republicans acknowledged was effective.

“The most important thing — and the lesson that most successful candidates learn early on — is to define your opponent before they define you,” said former Trump campaign manager Corey Lewandowski, who is serving as a senior adviser to the reelection campaign. “We’ve got what I think is the greatest counter-puncher in the history of politics in Donald Trump, and when he brands people, it tends to stay with them for a long, long time.”

The Trump team views China as one of their most effective lines of attack against Biden. The campaign’s digital advertisement accused the former vice president of having a cozy relationship with the country. Days after the commercial was released, the pro-Trump super PAC America First Action issued several ads accusing Biden of trying to advance China’s interests.

Complicating the anti-China push is that Trump has at times had kind words for President Xi Jinping. But campaign officials are undeterred and say their desire to tie Biden to the country is grounded in data. This week, Trump pollster John McLaughlin commissioned a survey that found that 70 percent of likely voters believed that China knowingly kept coronavirus information from world health officials.

Others see little point in pushing a positive message about Trump: Views of him are baked in, they argue, and winning over a sizable number of those who oppose him is futile. The focus should be on bringing down Biden, they say.

“Donald Trump’s numbers are harder than diamonds. He can’t budge them with dynamite because he is who he is, and that won’t change until Washington freezes over,” said Alex Castellanos, a longtime Republican strategist who helped to oversee a pro-Trump super PAC in 2016. “Define Biden is the way to go.”

Ultimately, it is Trump himself who is likely to determine how and when to engage Biden. The president recently chose to delay the proposed TV assault on Biden over China, according to two people familiar with the decision.

But during a Tuesday briefing, Trump noted that “there’s been nobody tougher than me on China,” and pointed out that he made the country a centerpiece of his 2016 campaign. The same could well be true this time.

“We think we know where [the virus] came from,” he said, “and we’ll be talking about that probably a lot.”