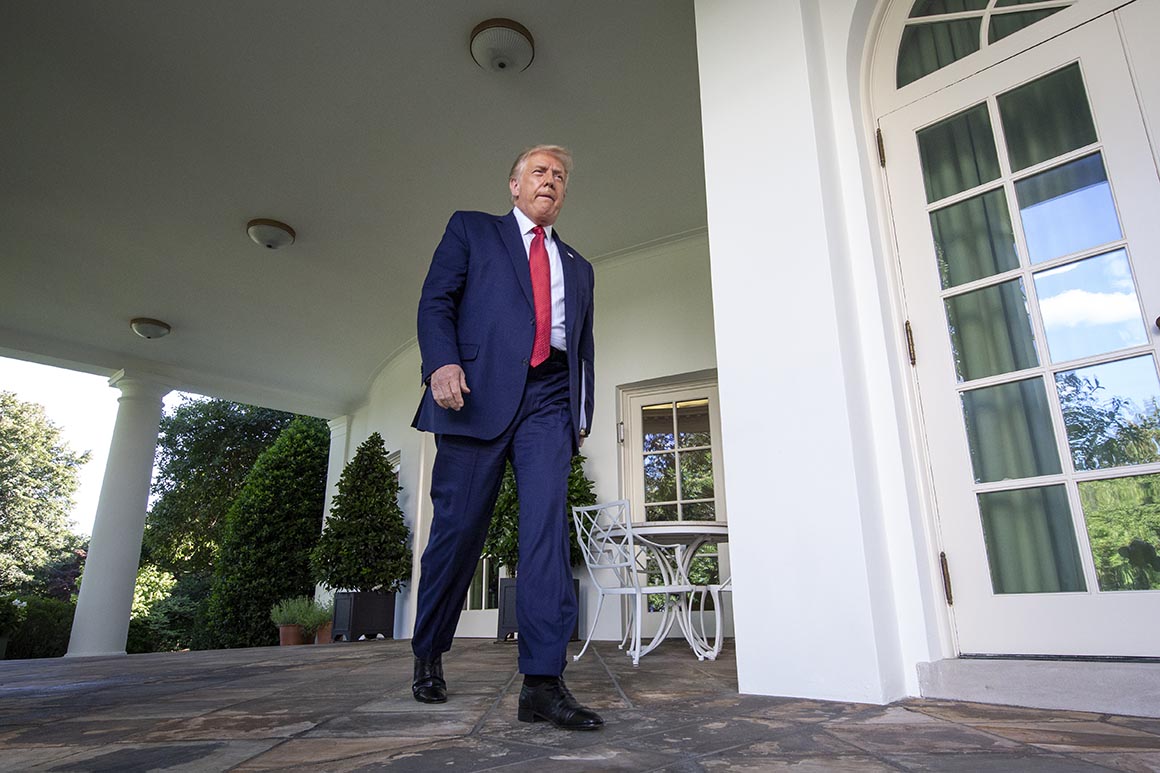 “You want to play offense, not defense in the Rose Garden. It’s not that we don’t agree with all his points on the far left agenda of Biden but it’s not the time or place,” said one Trump fundraiser.

Incumbent presidents have always used the power of the office to their advantage during an election, at times skipping more traditional campaign trail events like parades or shaking hands at local diners in lieu of introducing policies, giving presidential speeches and showing off the eye-popping grandeur of the presidency with Air Force One and the White House.

While running for president in 1976, Jimmy Carter defined such tactics as a “Rose Garden strategy,” complaining that President Gerald Ford was using the White House to keep the spotlight on him. Four years later, Carter, now president, also kept to the White House with the Iran hostage crisis swirling and the November election approaching. The tactic didn’t work for either incumbent.

Trump doesn’t have much of a choice.

Unable to fully return to the frequent MAGA rallies he loves due to a pandemic, the president has instead used White House events to campaign against Biden.

Trump started early on during the outbreak, occasionally going after Biden during the almost daily coronavirus task force briefings. At one point, Trump said that under a Biden administration, countries like China, Japan, Mexico and Canada would “own America.”

The president has also done it at more sedate events, such as listening sessions. On Tuesday, at a White House roundtable discussion on crime prevention, the president alleged, without evidence, that Biden “and the radical left” want “open borders” for the MS-13 gang.

Then there was Tuesday’s monologue, a meandering, hour-long speech that admonished Biden for any number of things: for the state of the country’s roads and bridges, for a movement to “abolish the suburbs,” for pushing to eliminate windows through climate policies. As is often the case, many of the political attacks were misleading or made without evidence.

Trump’s allies say the president is merely punching back at Biden when he has a platform during the coronavirus.

“I don’t see anything inappropriate with the comments the president has made,” he told reporters. “Those were policy differences that the president highlighted and … normally you would call that a legitimate debate.”

And Meadows stressed that Tuesday’s appearance was not off-the-cuff Trump.

“It wasn’t quickly planned,” he said. “The event was on the books for several days.”

A person close to the Trump campaign questioned if the efforts were anything new for the president, who has been mixing politics with his day-to-day duties since Inauguration Day. But the person encouraged Trump to use the lack of rallies to his advantage.

“I think it’s better for him in the short term for him to not have rallies,” the person said. “Use the next month or so to do smaller scale events that make him look as presidential as possible in swing states that will dominate local media.”

Government ethics specialists, however, lament the ongoing erosion of the tenuous firewall between politics and governing. The Hatch Act has for decades technically prohibited government employees — excluding the president, vice president and some senior officials — from using their position for certain political activities. But Trump’s time in the Oval Office has revealed just how ineffective the law is when it comes to constraining presidential expectations.

“Trump’s flouting the norm with the Hatch Act in the Rose Garden is consistent with his past actions, giving carte blanche to his staffers for violating the Hatch Act,” said Kathleen Clark, a law professor at Washington University in St. Louis who specializes in government ethics.

The law has also not constrained Trump’s staff. Under Trump, formal complaints to the government office that oversees compliance with the Hatch Act have spiked. Yet no staffers have been punished under the law, even when the compliance office recommended taking action. Still, some believe the law might eventually be put to use.

“The president is obviously abusing White House venues like the Rose Garden to substitute for his political rallies,” said Norm Eisen, a former Obama White House ethics chief and fellow at the Brookings Institution. He’s not even making a secret of it. This kind of blurring violates the spirit of the Hatch Act. It may also expose some of his assistants to legal liability to the extent that they’re involved in intentionally violating the law.”