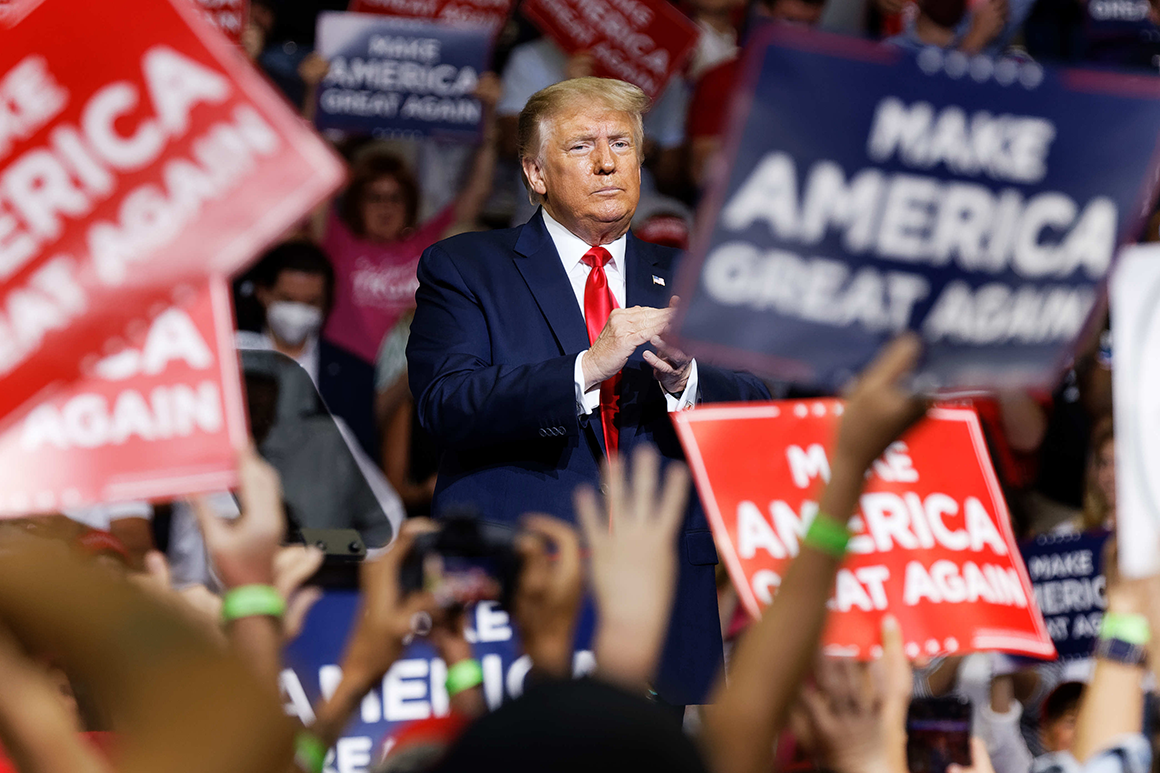 Chaos. Confusion. Hours-long lines. That’s what we saw in Georgia’s primary election — and likely what we’ll see in New York and Kentucky this week.

“Everybody’s just ready to start slugging this thing out,” said Greg McNeilly, a Republican strategist in Michigan and longtime adviser to Secretary of Education Betsy DeVos. “It’s going to feel much more like trench warfare, World War I, than anything else … lots of gassing and hand-to-hand combat.”

In Tulsa and in the days beforehand, Trump and his allies signaled the beginning of a scorched earth campaign. Trump’s son Donald Trump Jr. has posted memes portraying Biden — baselessly — as a pedophile. Trump’s campaign released an ad on Friday depicting Biden as aged and confused, calling him “clearly diminished” and lacking “mental fortitude.” On Saturday, he continued to suggest without evidence that Biden has health issues, saying ‘There’s something wrong with Biden.”

The no-boundaries approach is in keeping with Trump’s smashmouth style. Yet it’s also a necessity for an unpopular president facing an electoral landscape that’s tilted against him. Amid a pandemic that has ravaged the economy and killed about 120,000 Americans, Trump has fallen behind Biden by nearly 9 percentage points in the RealClearPolitics national polling average, and he lags behind the presumptive Democratic nominee in most swing states. The electoral map has become so treacherous for Trump that his campaign is spending on advertising in states that once appeared safely in his camp, such as Iowa and Ohio.

Trump’s advisers have long believed he could recover if he could drag Biden’s favorability ratings down. Confronting an opponent who is viewed more favorably than Hillary Clinton was in 2016, Trump is laboring not only to depict Biden as mentally unfit – but as an addled tool of the Democratic Party’s most extreme fringe.

The effort to yoke a centrist Democrat to an “unhinged left” was road-tested in Oklahoma, where Trump mocked Biden as “a helpless puppet of the radical left.” Among the lessons of Tulsa, which will inform countless rallies in the months ahead, was that invoking lightning rod progressives such as Rep. Alexandria Ocasio-Cortez draws a more fervent response than criticizing Biden in isolation — and that linking Biden to that wing of the party is Trump’s lodestar.

“He believes that he has to push Biden to the left, and I think that’s correct strategically,” Frank Luntz, the veteran Republican consultant and pollster, said in an email. “If Biden is seen as a centrist, he’ll have an advantage among swing voters who don’t want to support an extremist. But if he’s seen as left-wing ideologically or overtly partisan, swing voters will have a problem with him.”

For Biden’s part, the unofficial election kickoff came just days before Trump spoke in Tulsa, with Biden lacing into Trump over his coronavirus response, then releasing the first major advertising offensive of the general election campaign.

A $ 15 million, five-week campaign on TV, digital, radio and print, the advertising push will put Biden on the air on national cable and in six battleground states Trump carried in 2016: Wisconsin, Michigan, Pennsylvania, North Carolina, Florida and Arizona.

“We’re playing offense, buying programs like daytime Fox News and NASCAR to get in front of a large volume of Obama/Trump voters,” Patrick Bonsignore, Biden’s director of paid media, said in a memo describing the buy.