Trump's Tries To Appeal To 'Housewives' And White Suburbs, But They're Declining 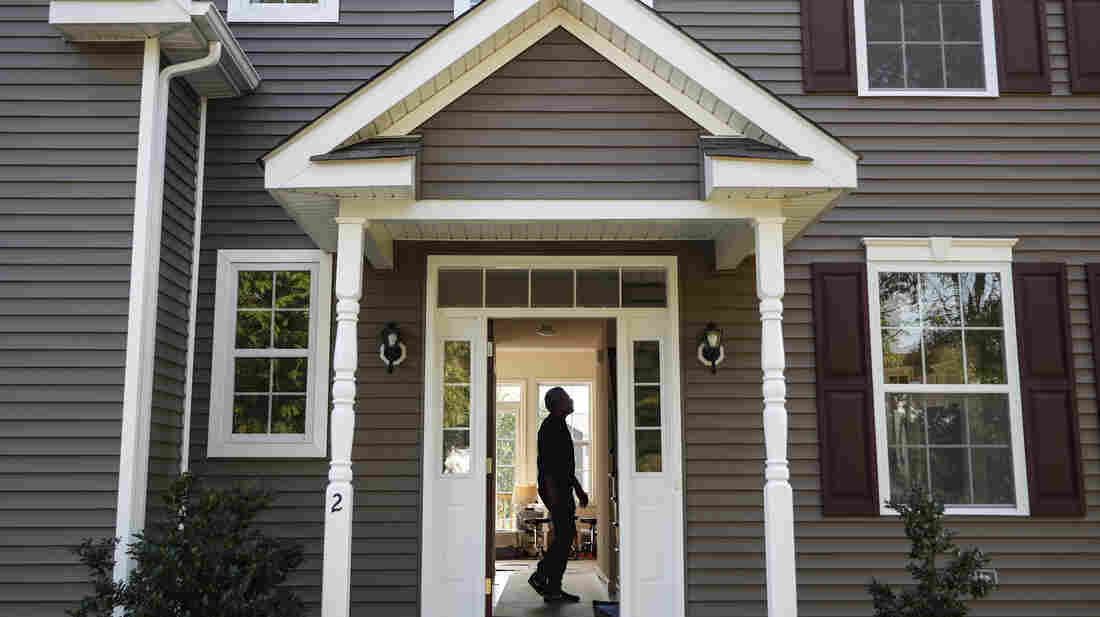 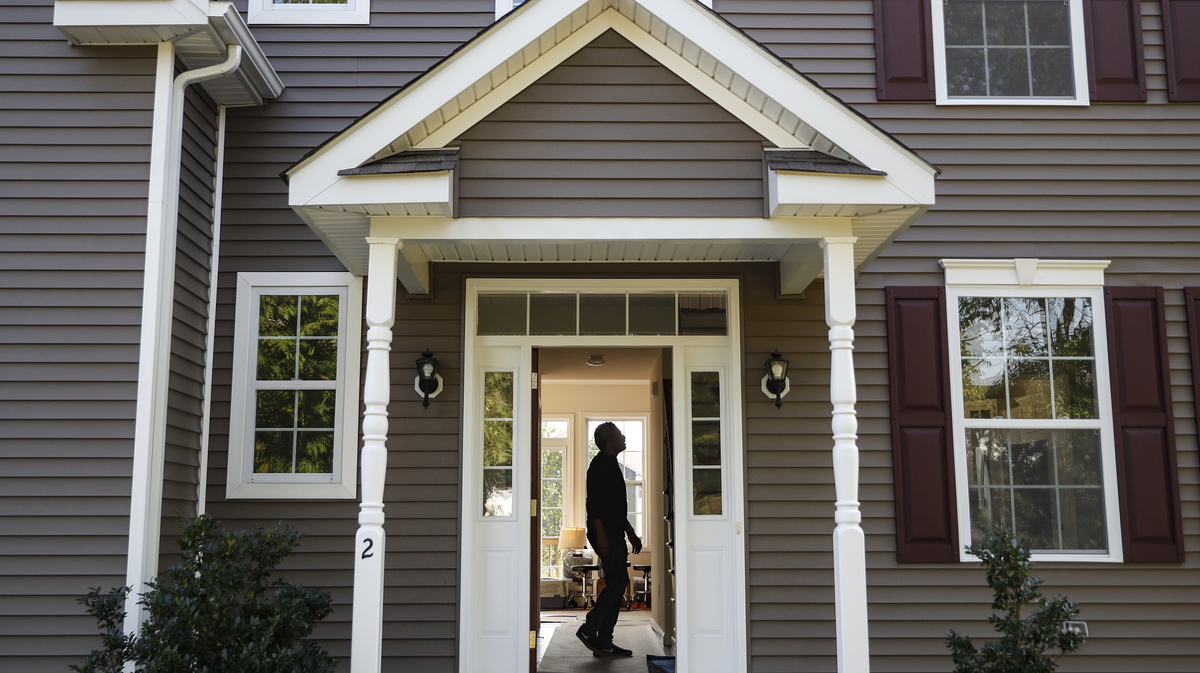 A new homeowner tours his new place in Washingtonville, N.Y., earlier this month.

Suburban voters have been growing as a share of the electorate since the mid-1990s, and they have become consequential in presidential elections. They could be determinative in this one, too, as they make up roughly half of all voters.

That makes it even more necessary for a Republican to win the them.

Based on national exit polls, here are the percentages of the electorate that suburban voters were in recent elections, plus the margins for each candidate:

You can see Trump won suburban voters narrowly in 2016, but he has cratered with them. In recent polling, he’s down by a historic margin, an average of 15 points.

And it’s especially bad among suburban women. In the latest NPR/PBS NewsHour/Marist poll, 66% of suburban women disapproved of the job Trump is doing overall, and 58% say they “strongly” disapprove.

That is stunning, considering suburban women have been a particular focus of Republicans in the last 20 years, dubbed everything from “soccer moms” to “security moms” to “Wal-Mart moms.”

Whatever you call them, they’re not in Trump’s corner — and the consequences have been massive for Republicans. They have been unable to pass any major legislative items since Democrats wrested control of the House in 2018. Democrats were able to do so because of their surprising strength in right-leaning suburban districts. 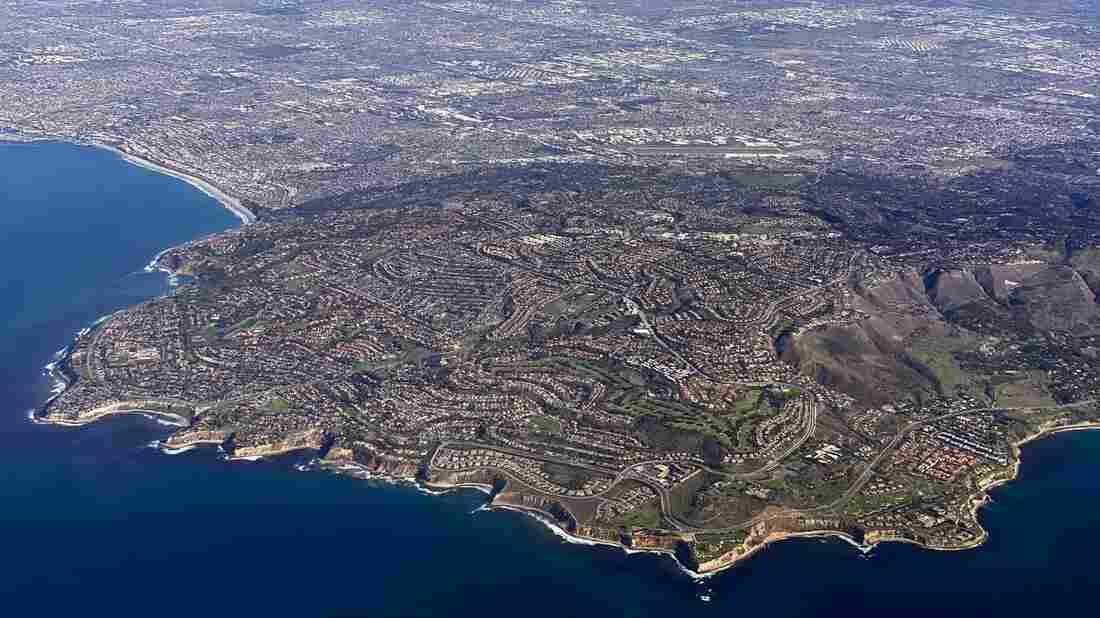 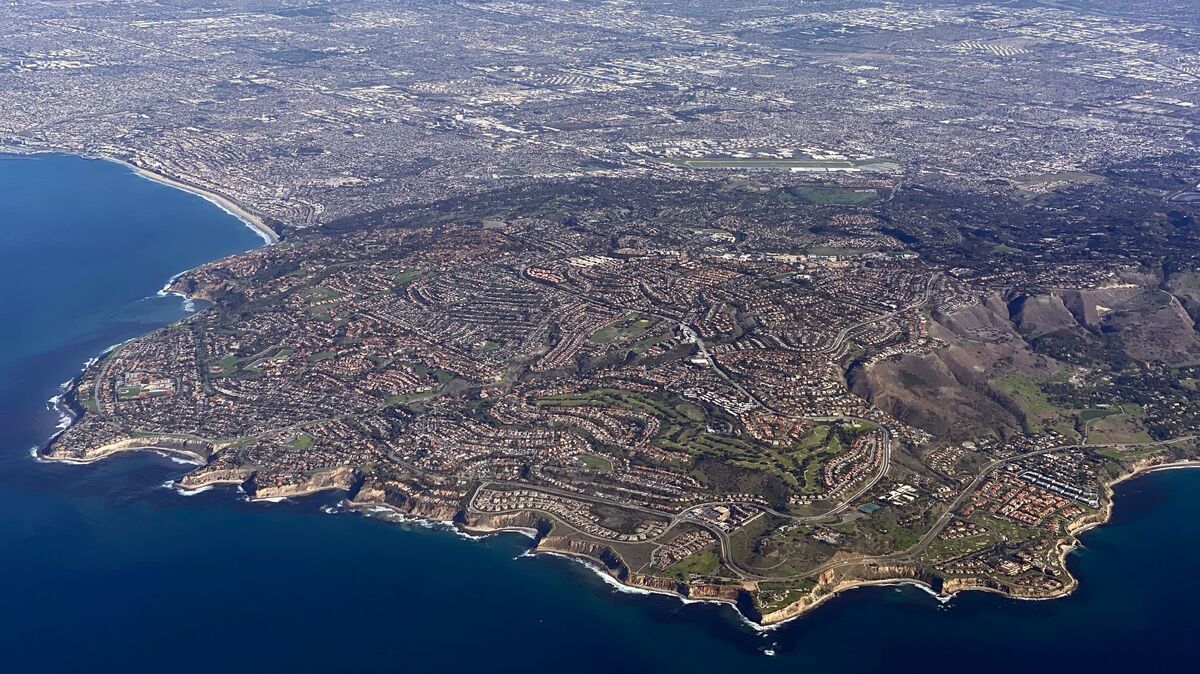 An aerial view of Rancho Palos Verdes, a suburb city of Los Angeles.

Trump needs them back, and he’s trying to use fear to do it. Amid COVID-19 spikes, Trump is trying to change the subject, running an ad called, “Abolished.” It makes the case that “You won’t be safe in Joe Biden’s America,” because police departments would be defunded — even though Biden has said he’s not in favor of defunding the police.

And Trump seems to be trying to make his case with an anachronistic racial appeal to a declining audience.

Trump claimed that if his Democratic opponent is elected president, “our suburbs” would be destroyed. In recent weeks, he specifically called out a 2015 Obama-era fair-housing initiative that requires local governments to address historic patterns of racial desegregation.

“Your home will go down in value and crime rates will rapidly rise,” Trump said. “People have worked all their lives to get into a community, and now they’re going to watch it go to hell. Not going to happen, not while I’m here.”

But the suburbs have grown more diverse since the mid-20th century when they were overwhelmingly white. The suburbs saw an explosion of growth then, as “white flight” from cities took hold.

Leah Boustan, a Princeton economics professor and author of the book, Competition in the Promised Land: Black Migrants in Northern Cities and Labor Markets, wrote in an op-ed in the New York Times in 2017:

I compared the patterns of black migration into cities and white departures for the suburbs in 70 Northern and Western metropolitan areas from 1940 to 1970. I found that for every black arrival, two whites left the central city. This figure puts a precise value on what contemporaries already suspected: When black people moved in, white people moved out.

Since then, though, particularly with Latino demographic growth, about two-thirds of America’s suburbs are white. A Pew Research Center study from 2018 found the suburbs to be 68% white, 14% Hispanic and 11% Black.

The share of white people was down 8 percentage points from 2000. And in that time, Pew found immigrants made up a quarter of suburban growth.

“He thinks it’s basically the planned development of Levittown in the 1960s as opposed to today’s suburbs, which are multiracial, diverse and highly educated,” Matthews said.

Trump’s view of women’s role in — or out of — the home is also antiquated. At his Tulsa rally last month, he made up a story for effect that seems to have been a predecessor for the ad now running. He warned of what would happen, in his view, if police were “defunded.”

“Hey, it’s 1 o’clock in the morning,” Trump said, “and a very tough, I’ve used the word on occasion, hombre, a very tough hombre is breaking into the window of a young woman whose husband is away as a traveling salesman or whatever he may do. And you call 9-1-1, and they say, ‘I’m sorry, this number’s no longer working.’ By the way, you have many cases like that, many, many, many.”

Trump also appealed to “The Suburban Housewives of America” in a tweet Thursday, saying, “Biden will destroy your neighborhood and your American Dream. I will preserve it, and make it even better!”

The Suburban Housewives of America must read this article. Biden will destroy your neighborhood and your American Dream. I will preserve it, and make it even better! https://t.co/1NzbR57Oe6

But the percentage of stay-at-home mothers has declined significantly from the 1960s when they were about half of all mothers.

Today, they’re about a quarter, according to Pew:

Trump has a view of America that seems frozen in time. He’s said that America has most lived up to his “Make America Great Again” ideal at the turn of the 20th century and in the “late ’40s and ’50s,” the post-war boom time. Nonwhites, though, hardly shared in the prosperity — or equality.

There has been a sea change in America in recent decades on everything from views of race and protests to who Americans’ neighbors are. The New York Times, for example, found that all-white neighborhoods are practically entirely gone, compared to their prominence 40 years ago:

In 1980, about a quarter of the census tracts in America were almost exclusively white — 97 percent non-Hispanic white or more — and one-third of white residents lived in such a neighborhood. Those figures are probably undercounts, as the 1980 census lacked tract boundaries for much of rural America. But by the latest census data, just 5 percent of white residents live in such a place, mostly in rural areas.

Trump was able to squeeze out an Electoral College victory in 2016, despite losing the popular vote.

And this year, as growing numbers of Americans disapprove of his handling of the coronavirus pandemic, he’s making a gamble with a shrinking part of the electorate.

staronline@reachplc.com (Tiffany Lo) A cat has been caught in act of living her live to the fullest while using the amenities in his owner's house. Emily...
Read more