Trump’s wild claims of voter fraud blow back on campaign... 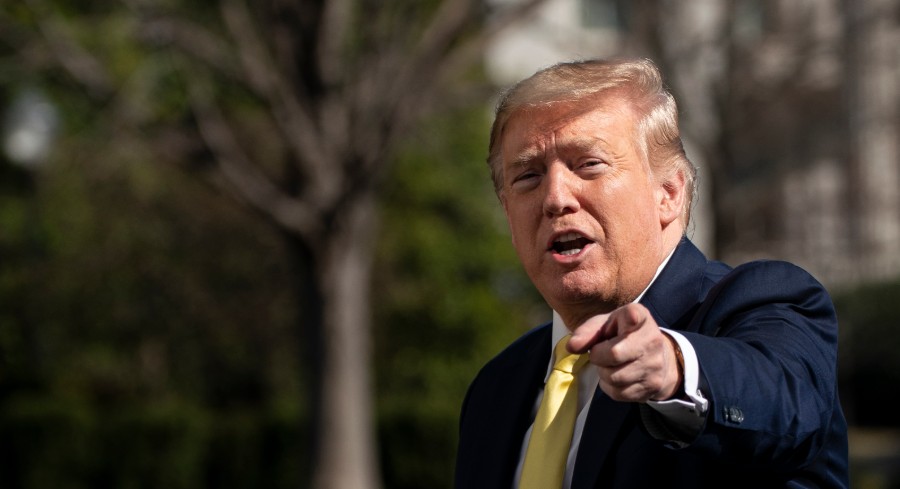 TALLAHASSEE — Days before President Donald Trump deceptively called vote-by-mail “corrupt” and damaging to Republicans, his campaign hired an operative tied to a 2012 absentee ballot scheme that sent a Florida Democratic operative to jail.

The plot involving Giancarlo Sopo — who has never been charged with wrongdoing — was highlighted in a report on election fraud that Trump’s campaign blasted out Wednesday to support his wild vote-by-mail attacks. Sopo joined the Trump campaign April 1.

“The national news media routinely and condescendingly dismiss any concerns about voter fraud, including state vote-by-mail provisions,” the campaign wrote in an email highlighting the Heritage Foundation report, a document that was used by the president’s voter fraud task force, which failed to turn up proof of widespread voter fraud.

The email, in addition to exposing an uncomfortable incident in a staffer’s past, highlights the exaggerated nature of the president’s attacks on voting by mail. The absentee ballot scheme involving Sopo wasn’t technically voter fraud, it was caught by authorities, and it never would have resulted in illegally cast ballots even if it hadn’t been stopped.

The case tied to Sopo, Trump’s new director of rapid response for Spanish-language media, was listed in the Heritage report along with hundreds of others throughout the country over the span of three decades — a tiny fraction of the total elections held during that period.

The 2012 ploy involved 1,800 phony absentee ballot requests that were made for voters without their knowledge, an activity that is illegal in Florida. The plan was to use the requests to target infrequent voters to cast ballots for Joe Garcia, a candidate in a four-way Democratic primary for Congress, the Miami Herald reported at the time.

The scheme was directed by Jeffrey Garcia, a former top aide to former Rep. Joe Garcia. The two are not related.

Sopo, a Garcia campaign volunteer who later became the congressman’s spokesperson, said Jeffrey Garcia tricked him, a cousin, and other staffers into thinking the phony requests were legitimate.

After Joe Garcia won the election, investigators raided the Miami-Dade home of Sopo’s cousin. Sopo resigned as the congressman’s communications director and testified against Jeffrey Garcia.

Breaking his silence in the case, Jeffrey Garcia on Thursday accused Sopo of being “duplicitous” about his involvement in the crime.

“He literally begged to be part of this scheme,” Jeffrey Garcia told POLITICO in an interview. “He knew it was wrong. He did this with eyes wide open.”

“This was brought on by my own doing and personal failures and I am solely responsible,” Garcia wrote at the time.

“This was a not-well-thought-out attempt to get more voters to participate in vote by mail,” he said. “Obviously it didn’t work.”

“Despite his admission that he alone orchestrated the fraud, some Democrats continue to hire him,” Wolking told POLITICO. “The irony is that Democrats routinely deny the existence of voter fraud, but here they are using Democrat Jeff Garcia’s illegal ballot scheme to try to smear President Trump’s campaign.”

Sopo told POLITICO he was a “young volunteer” at the time and had no direct role in the scheme.

“I was asked to help with what was described as a data-entry project that had been approved by the campaign’s legal counsel,” Sopo said in an email. “At the time, I was going to school and working full time, so I referred others for the project.”

Jeffrey Garcia said he regrets taking responsibility for the crime.

“Giancarlo remains ungrateful for my successful attempts to keep him out of jail," Garcia said. Sopo, he said, is lying about and has "finally found his home on the Trump campaign because Democrats would no longer hire him.”

Sopo’s political bent has shifted over the years. He began writing for a conservative publication in 2018 and joined the Trump campaign as the president began demonizing voting by mail.

The president’s assault on absentee voting comes less than a month after he and the first lady mailed in their own ballots for the March 17 presidential primary in Florida, their newly adopted home state.

“According to the best empirical data I’ve seen, there were fewer than 500 prosecutions for crimes related to absentee ballots over a 12-year period, out of billions of ballots cast,” said Rick Hasen, an election law expert and author of the book “Election Meltdown: Dirty Tricks, Distrust, and the Threat to American Democracy.”

That, and the success of five states, including Colorado and Washington, in running all-mail elections has convinced most people that the convenience of voting by mail is worth the small risk, Hasen said in an email.

“Now, of course, the calculation has changed because the benefits of voting by mail are much greater: Without it, millions of voters face potential disenfranchisement,” he said.

Democrats accuse Republicans of using voter fraud as an excuse to pass measures designed to suppress the vote. And in Florida they were quick to point out the irony of Trump hiring someone connected to an election fraud incident highlighted by his campaign.

In that case, the fraud was limited to requesting absentee ballots for registered voters without their knowledge. The requests were flagged as suspicious by the Miami-Dade elections office and reported to state investigators. The ballots were never used to cast votes.

Trump has taken a particular interest in elections-related crimes tied to the Miami-to-Key-West congressional district where Sopo was ensnared in the Garcia scheme.

In addition to the absentee ballot plot, Jeffrey Garcia was involved in secretly and illegally funding a phony tea party candidate who ran to siphon votes from the Republican in the race, state Rep. David Rivera. Rivera went on to defeat Joe Garcia in 2010.

In an apparent act of revenge, Rivera’s associates then secretly and illegally funded a Democratic candidate, Justin Sternad, to siphon votes from Garcia in a 2012 rematch. Sternad and Rivera’s girlfriend and adviser were jailed. Federal prosecutors named Rivera as a suspect but the Republican was never charged. Rivera lost the election to Garcia.

The scandal had particular salience for Trump, because Rivera was a close friend of Sen. Marco Rubio (R-Fla.), a Trump opponent in the Republican presidential primary. The Trump campaign ran TV ads that highlighted what it called Rivera’s corruption.

Before the 2016 Florida Republican primary, Trump, again without evidence, raised the specter of “dishonest” voting and said he would ask law enforcement to investigate. Law enforcement officials told POLITICO at the time that the candidate never made the request and they saw no evidence of fraud.

Trump dropped his rhetoric after he defeated Rubio.

Since then, Trump has painted vote-by-mail as an anti-Republican hotbed of chicanery even as both major political parties spend huge sums to boost their vote-by-mail capabilities.

In Florida, the nation’s largest swing state and a key for Trump’s re-election, 2.6 million people voted by mail in 2018, more than one-third of all votes cast. That year, like most, Republicans returned more mailed ballots than Democrats.

Florida, like other states, has gone to great lengths to prevent ballots from being cast illegally.

To manipulate a mailed-in ballot, a fraudster would have to find the voter’s signature — which is not public record in Florida — then fraudulently copy it to the absentee ballot envelope sent back to the election supervisor’s office.

The forged signature would have to be good enough to fool the staff who compare the one on file with the one on the envelope. Staff members train with a signature-verification expert, said Miami-Dade election supervisor Christina White. And absentee ballots in Florida are sent only to voters who request them.

“It’s a safe and secure voting method,” White said. “We have multiple levels of security measures. And they work.”