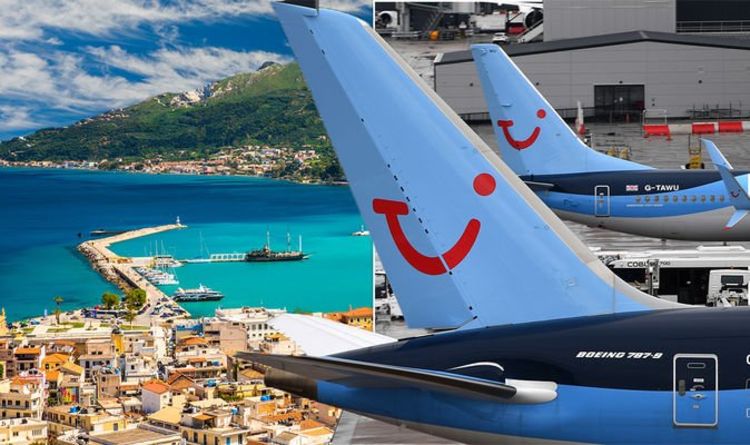 He added that new arrivals from the holiday hotspot pose a risk to public health.

Passengers onboard the flight did not have the opportunity to reschedule their journeys home, as the decision was made once the flight had already departed from Zante.

They also face 14 days of quarantine.

A TUI spokesperson told Express.co.uk: “We can confirm that customers returning from Zante to Cardiff on TOM6215 will be advised that they will be tested for COVID-19 48 hours after they return and will have a repeat test in eight days’ time. They will also be asked to self-isolate for 14 days.

“The health and safety of our customers and crew is our absolute highest priority and we are very supportive of airport testing.

“We believe that with good track and trace processes, testing at airports and a nuanced approach to travel corridors, customers can continue to travel safety.

“The Welsh Government is also asking passengers arriving in the coming days to arrange coronavirus tests when they return home.”

The airline has since made the decision to revoke flights from some regions in Zante.

In a statement, Andrew Flintham, managing director TUI UK and Ireland said: “Following the recent positive cases from customers retuning from Zante, we have taken the decision to no longer offer holidays in the resort of Laganas from Thursday 3 September.

“Laganas is a popular resort with young people who traditionally holiday in large groups of friends. The health and safety of our colleagues and customers is our primary concern and recent cases shows that some customers are not following social distancing and covid safety measures. It is therefore the right thing to do to protect and reduce a now identified potential risk to others by no longer offering holidays to this specific resort.

“The recent cases in Wales have highlighted a demographic of customers that have recently returned from Zante and subsequently tested positive. As the only airline that flies between Cardiff and Zante it has allowed us to understand trends that may also be seen in other areas of the UK.

“We believe that with good track and trace processes, testing at airports and a nuanced approach to regional travel corridors, customers can continue to travel safety.”

In a statement, Mr Gething said there are currently “six clusters amounting to over 30 cases in the last week from four flights, of which two of these flights landed in England”.

The minister also called for an “early meeting with the UK government and devolved nations” to determine new rules for quarantining travellers on their return from Greece.

“Public Health Wales have expressed direct concerns about the public health risk posed by passengers returning to Cardiff this evening from Zante/Zakynthos. I share that concern,” he said.

Scotland’s chief medical officer, Dr Gregor Smith said: “There is a compelling public health risk around importation of the virus, especially given the number of imported cases linked to the Greek islands.

“The flow of travel between Scotland and Greece, and the behaviour we have seen from some of those travellers, means that on public health grounds there is a strong case – supported by public health directors – to remove Greece from the exemption list.”

A number of cases in Scotland have been linked back to travellers flying to and from Greece, according to officials.

In Greece, there are roughly 13.7 cases per 100,000, according to the European Centre for Disease Prevention and Control at the time of writing.