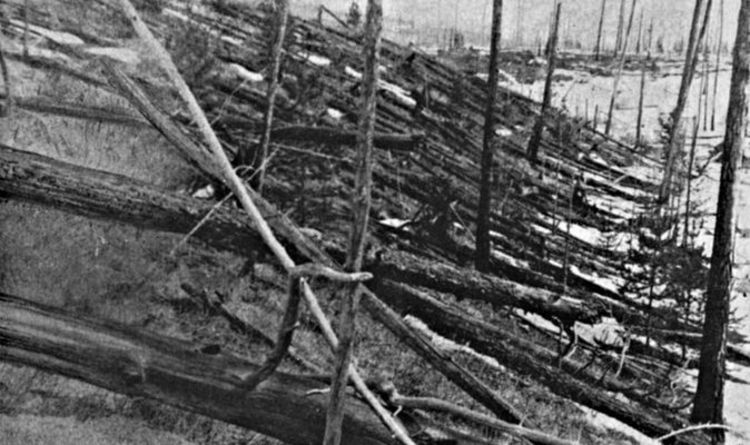 In 1908, a small asteroid exploded over Siberia’s Tunguska which ruined woodlands across 800 miles after it went undetected by experts. The blast was so powerful it was equivalent to 30 megatons of TNT at an altitude of 10 to 15 kilometres (6.2 to 9.3 miles).

However, the event has thrown up so mysteries over the ensuing century, with very little substance in terms of debris from the rock discovered.

This has thrown up the obvious question: Where is the physical evidence that a small space rock hit Earth?

New research has revealed the asteroid never collided with the Earth’s surface.

Instead, the researchers deduce that the rock passed through Earth’s atmosphere at such an angle it entered and then exited.

If it were made of ice or rock, the extraterrestrial body would have disintegrated when it hit Earth’s atmosphere.

In the team’s hypothesis, an iron meteor could have caused a massive shockwave which would be responsible for the flattening of the trees before it left the atmosphere largely intact.

Astronomers from the Siberian Federal University said: “We have studied the conditions of through passage of asteroids with diameters 200, 100, and 50 metres, consisting of three types of materials – iron, stone, and water ice, across the Earth’s atmosphere with a minimum trajectory altitude in the range 10 to 15 kilometres.

“The results obtained support our idea explaining one of the long-standing problems of astronomy – the Tunguska phenomenon, which has not received reasonable and comprehensive interpretations to date.

“We argue that the Tunguska event was caused by an iron asteroid body, which passed through the Earth’s atmosphere and continued to the near-solar orbit.

“Within this version we can explain optical effects associated with a strong dustiness of high layers of the atmosphere over Europe, which caused a bright glow of the night sky.”

The Tunguska meteor was so big it would wipe out London completely if it hit the UK capital.