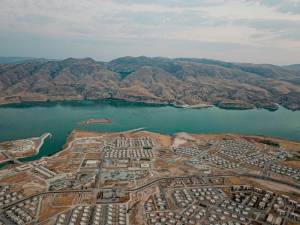 JUST two roofs poke through the vast expanse of an artificial lake that has swallowed a Turkish town whose caves and pre-Ottoman ruins once drew in global tourists.

The dust settling from the hammering of construction sites around the Tigris River lake outlines the makings of a brand new city, with an unfinished bazaar and roads that are all works in progress.

But trader Abdurrahman Gundogdu worries whether the new version of Hasankeyf in Turkey’s mostly Kurdish southeast will ever recapture the magic it had before the Ilisu Dam erased the original town that stood here for 12,000 years.

“I’m making one percent of what I used to earn before in the old town,“ the 48-year-old complained, outside his empty shop filled with jewellery but no people.

“There are local tourists but they have no money to spend.”

The dam, completed and filling with water since last year, is meant to bring electricity to an underdeveloped region that officials hope to revive with jobs and long-needed investment.

“This is such a magnificent project,“ President Recep Tayyip Erdogan enthused, when he was still prime minister in 2009, promising to build “a very modern” town in place of the old one.

Yet his dream has already created tensions with neighbouring Iraq by limiting its access to water.

And some of the town’s 3,000 residents lament the 500 or so graves that had to be exhumed and urgently moved to higher ground last September.

Some families were left devastated after failing to finish all the paperwork in time and seeing their dead submerged.

The much-photographed pillars of the town’s old bridge have also vanished, as have most of the myriad caves that humans carved out of the river’s limestone cliffs through the millennia.

“It’s a very tragic event,“ said Ridvan Ayhan, an activist in a group which opposes the dam project.

“It isn’t something people can stomach. All of a sudden, all your ancestors, your whole past, the history are under water.”

No reason to come

The area is rich with natural wonders such as a “weeping” cave that exudes moisture, waterfalls and valleys.

Some of the town’s original monuments, including the 1,600-tonne Artuklu Hamam bathhouse and remnants of a 14th-century Ayyubid mosque, were moved before the water rushed in. There is also a new museum.

Yet the region struggled even before the coronavirus grounded world travel and crimped Turkey’s ability to follow through on big projects.

And some of the new construction work is off to a creaky start.

Residents said three new floating docks around the lake broke soon after completion, and mentioned problems with the town’s water and electricity.

Authorities hope the tourism season will get off to a better start next year, when the pandemic might possibly ease.

“Officials tell us, ‘this will be the east’s Bodrum, Marmaris’,“ trader Bulent Basaran, 50, said, referring to popular tourism resorts on Turkey’s west coast.

“At present, I cannot see the light because there are serious problems.”

Ayhan, the anti-dam activist, said grimly it was “foolishness” to expect tourists to return.

“If there is no history left, it makes no sense to come here,“ he told AFP.

“The only people who come, mainly come out of curiosity, to see how it disappeared. They come once, with that purpose.”

Yet trader Basaran was less pessimistic about Hasankeyf’s long-term prospects, expecting things to turn around within five years.

For many local tourists, the new lake offers a chance to do something different.

Asiye Sahin, who was visiting with her husband and four children from the town of Midyat, south of Hasankeyf, sounded elated before setting off on a boat tour.

“We’re really excited. I’ve seen the sea before, but never got on a boat,“ she said.

There are also offshoots of optimism among some locals.

Cetin Yildirimer, a 29-year-old former tour guide, celebrated on a boat with his new wife before the couple move into one of the homes built for the original town’s residents.

He questioned whether visitors would “find what they are looking for” now that the old town is submerged, but insisted tourists would “absolutely come if there was no pandemic”.

“The old order has completely gone,“ he said, “and so now we’re looking ahead.” – AFP