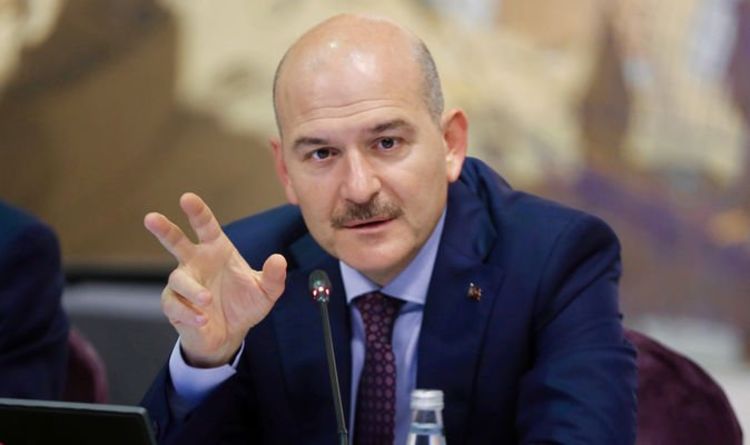 “We will send back those in our hands, but the world has come up with a new method now: revoking their citizenships,” Mr Soylu told reporters. “They are saying that they should be tried where they have been caught. This is a new form of international law, I guess,” he said. He continued: “It is not possible to accept this. We will send back ISIS members on our hands to their own countries whether they revoke their citizenships or not.” Mr Soylu added around 1,200 foreign ISIS members, mostly westerners, were currently being held in Turkish prisons.

Turkey launched a controversial offensive into northeastern Syria against the Kurdish YPG militia last month, a move prompted by US President Donald Trump’s decision to withdraw troops from the region.

The assault however, triggered widespread concern over the fate of ISIS prisoners in the already-volatile region.

The YPG is the main element of the Syrian Democratic Forces (SDF), which has been a key US ally in pushing ISIS out of Syria, and has kept thousands of jihadists in jails across the country’s northeast.

Ankara and Washington’s western allies have warned that the military operation could hamper the fight against ISIS and enable the group’s resurgence.

Turkey, which considers the YPG a terrorist group linked with insurgent Kurdish militants on its own soil, has brushed off those concerns and pledged to continue the battle against ISIS.

It has also repeatedly called on European countries to repatriate their citizens fighting for the jihadists.

Mr Soylu had already warned at the weekend that Turkey would send back ISIS members captured by Turkish forces to their home countries and denounced European governments’ inaction on the matter.

Turkey is “not a hotel for jihadists,” he said.

Under international law, a person can only be stripped of their citizenship by a government if doing so does not leave them stateless.

Britain earlier this year revoked the citizenship of a teenager who had fled her family home in London when she was just 15 to join ISIS in Syria.

The case of Shamima Begum cast a harsh spotlight on the security, legal and ethical conundrums facing European governments dealing with citizens who joined the ranks of a terrorist group bent on destroying the West.

In August, Britain stripped another citizen of his passport for joining ISIS. Muslim convert Jack Letts, a dual UK-Canadian national, was jailed after being captured by Kurdish YPG forces while trying to escape Turkey in May 2017.

The Canadian government said that the UK had “off-loaded” its responsibilities.

France, Germany and Denmark have also stripped dual nationals of their passports for joining the jihad.

The US said last month that it had killed ISIS leader Abu Bakr al-Baghdadi in northwestern Syria, where Turkey and Russia have troops.

But while the “caliph’s” death was hailed globally, the group has already named a new leader and promised to take revenge against the US.