Turkey’s Erdogan in horror confession admitting ceasefire will never be... 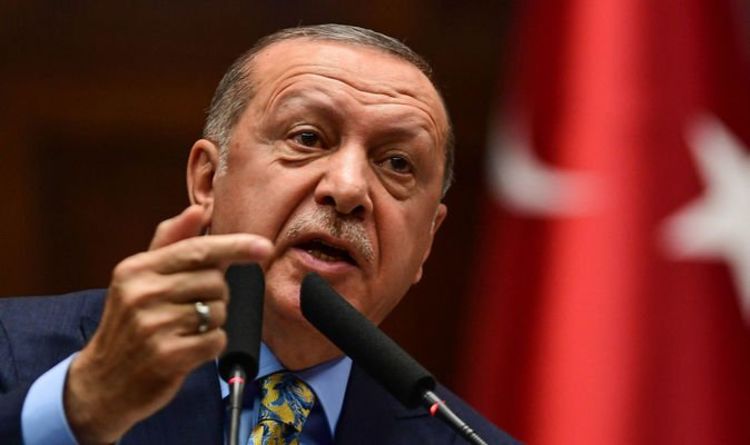 Ankara’s leader made the admission to US counterpart Donald Trump, adding that he did not have any concern over sanctions given to Turkey by Washington. Sanctions had been placed by Trump’s administration following Turkey’s offensive in Syria. According to broadcaster NTV, Erdogan said discussions with the US and Russia over Syria’s Kobani and Manbij towns were “not negative”.

Reports also suggest that Erdogan told Trump Turkey would “not negotiate with a terrorist organisation”.

But Mr Erdogan did offer a glimpse of hope, saying “we cannot declare a ceasefire until we clear this region”.

Those comments were in response to Trump’s offer of mediation in the area.

Last week, Turkey launched an incursion bid to try and drive Syrian-Kurdish fighters away from Ankara’s border with Syria.

Brussels claimed Turkey’s move “seriously undermines the stability and the security of the whole region” and was harming civilians.

Around 100,000 people have already been displaced by the operation, figures released by the UN show.

“Turkey did not come under attack; Turkey was not in danger.

“What we are witnessing is purely and simply the annexation of a part of Syria.”

Trump swiftly announced US troops would be redeployed along the conflict zone.

Today, NATO envoys are set to hold crunch talks on the impact of Turkey’s offensive into Syria.

It comes after allies raised fears about Turkey’s actions.

International leaders such as Prime Minister Boris Johnson urged Turkey to end the assault and enter dialogue with the Kurds.

He was joined in these calls by his French counterpart Emmanuel Macron.