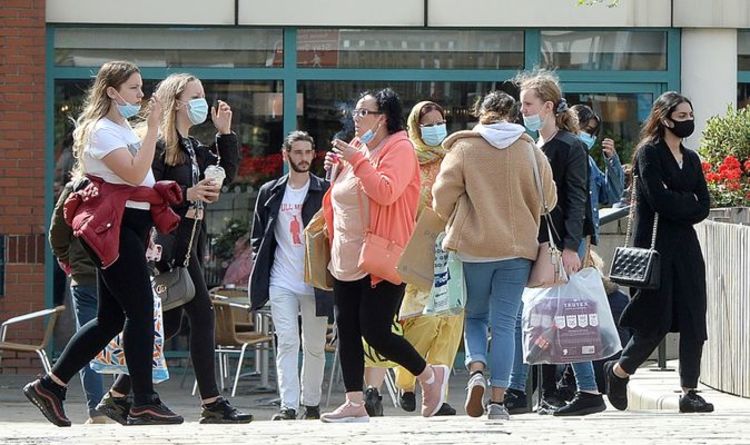 People living in different households in the Greater Manchester and Lancashire towns were yesterday banned from meeting and advised to only use public transport when essential. But officials stopped short of a full lockdown, allowing people to continue shopping, going to work and attending childcare settings including schools.

The new restrictions mean weddings, civil partnerships and funerals should be attended by no more than 20 household members and close family.

Health Secretary Matt Hancock said: “To prevent a second peak and keep Covid-19 under control, we need robust, targeted intervention where we see a spike in cases.

“The only way we can keep on top of this deadly virus is through decisive action led by the people who know their areas best.”

Restrictions in Wigan, Rossendale and Darwen have been lifted, bringing them into line with the rest of England.

Birmingham remained on the brink, joining the watch list as an “area of enhanced support” and Northampton became an “area of intervention”.

The Department of Health and Social Care said the sharp rise was in part due to a major increase in testing, but the percentage of people testing positive was nonetheless increasing, suggesting it was also driven by social mixing of people aged 20-39.

Meanwhile, research shows that people with two or more long-term health conditions have an almost 50 percent higher risk of getting a positive Covid-19 test. A study, led by the University of Glasgow, is the first to link both multi-morbidity and polypharmacy with the likelihood of contracting coronavirus.

It found those with multiple long-term health conditions are linked to a 48 percent greater risk of a positive test result.

For those with two or more cardiometabolic diseases like diabetes it is 77 percent higher.

“Our study shows that having a positive Covid-19 test is more common in those living with these health conditions.”

People with two or more long-term health conditions who appeared to be most susceptible to infection were from deprived areas, of nonwhite ethnicity, considered severely obese and those with reduced renal function.

Those of non-white ethnicity, who also had multi-morbidity, had almost three times the risk of a positive Covid-19 test.

Professor Frances Mair, of the University of Glasgow and a leading expert on multi-morbidity, said: “Given the high prevalence of multi-morbidity, particularly in older age groups, the more detailed understanding of the associations between these complex health needs and Covid-19, as provided in this study, will improve our understanding of the risks and help us better advise those most vulnerable to severe infection.”

SNP caves in: Nicola Sturgeon HUMILIATED as party forced to row back on controversial bill

The legislation was introduced in order to provide further protections against any hate crime relating to religion, sexual orientation or transgender identity. Initially, the...
Read more
U.K.

Watching a debate in the Commons this week, Mr Campbell highlighted the number of white male MPs on the Tory benches. However, one commentator...
Read more
U.K.

First Minister Nicola Sturgeon has released an advert depicting a young person infecting their grandfather with coronavirus. This has sparked a debate as some...
Read more
U.K.

NHS COVID-19 app: How does app work? Should you download it?

The NHS Test and Trace service will launch its new contact tracing app this week. The app’s arrival comes after months of waiting, after...
Read more
U.K.