Type 2 diabetes: Adding this spice to your meals could lower blood sugar 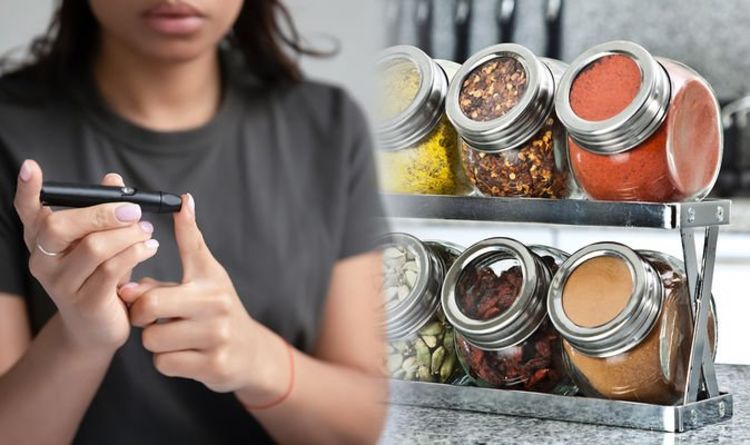 Type 2 diabetes affects the body’s ability to convert sugar from foods into energy. Instead, blood sugar levels rise in the blood – a major health risk. Which spice could lower your blood sugar readings?

Those with type 2 diabetes should aim to have blood sugar between 4-7mmol/L.

At least 90 minutes after eating, blood sugar levels should read under 8.5mmol/L.

However, insulin resistance means this process gets disrupted, causing blood sugar levels to rise in the bloodstream.

Exciting research by Professor Nia Bryant, from the University of Leeds, identified a set of proteins, called SNAREs, that are involved in transporting glucose.

More recently, she discovered that one particular SNARE protein – called Syntaxin 4 – is controlled by insulin.

Re-focusing the attention on insulin resistance, researchers from Beltsville Human Nutrition Research Center, America, found a spice that may help.

The research team found that naturally occurring polyphenols found in cinnamon have been shown to improve insulin sensitivity.

For 40 days, volunteers with type 2 diabetes consumed between one to six grams of cinnamon everyday.

From this experiment, the researchers discovered that cinnamon reduced fasting glucose levels up to 29 percent.

Based in the department of nutrition and dietetics, they learned how cinnamon interacts with numerous digestive enzymes.

By inhibiting α-glucosidase and pancreatic α-amylase, the breakdown of carbohydrates is slowed down.

This minimises the amount of sugar (glucose) that enters the bloodstream after eating, thereby benefiting blood sugar levels.

Secondly, researchers from the Iowa State University, America, recognised that a compound in cinnamon – hydroxychalcone – can act on cells by mimicking insulin.

This improved sugar uptake by cells, but the results are much slower than that of actual insulin.

With mounting evidence suggesting cinnamon can help with blood sugar levels, it may be worthwhile springing the spice on homemade meals.

Facebook
Twitter
Pinterest
WhatsApp
Linkedin
ReddIt
Email
Tumblr
VK
Previous articleSir Tom Jones: The shotgun wedding that saved his career
Next articleJustice Smith: 5 Things To Know About ‘The Get Down’ Star Who Came Out As Queer