Type 2 diabetes symptoms: The sign in your hands you could have the chronic condition 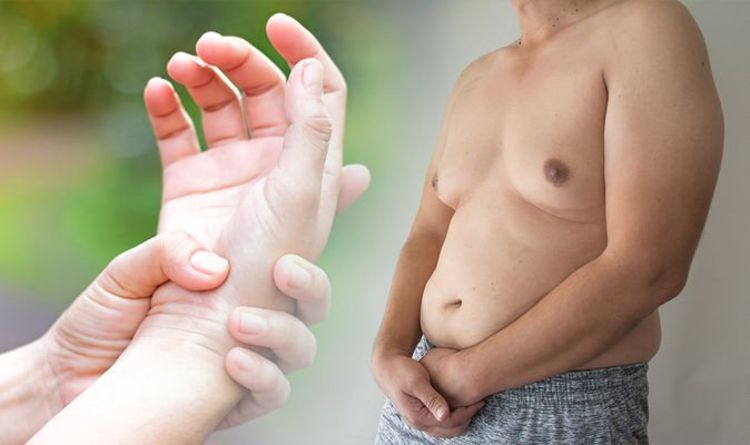 It adds: “Both people with type 1 diabetes and type 2 diabetes can be affected by diabetic stiff hand syndromen, but optimising glycemic control and physical therapy can slow down the development of the condition.”

Diabetic stiff hand syndrome is reportedly found in eight to 50 percent of patients with type 1 diabetes, but type 2 diabetics can also develop the disorder.

Diabetes.co.uk continues: “Prevalence is reportedly increased as patients have diabetes for longer, while it can also be more common in patients with diabetic neuropathy.

READ MORE: Vitamin B12 deficiency symptoms: The sign in your stomach you could be lacking B12

“Diabetic stiff hand syndrome is associated with being a predictor for other diabetes-related complications.”

So how do you know if you have diabetic stiff hand syndrome?

The condition is characterised by an inability to strengthen joints in the hand. This results in hand function being severely limited.

The stiffness may begin in the little finger and then spread to the thumb.

Stiffness may then prevent a person being able to being all their fingers together completely when they hold their palms together.

Diabetes.co.uk advises: “Thick, tight, and waxy skin may also develop on the back of your hand as diabetic stiff hand syndrome develops.”

Other symptoms of type 2 diabetes to look out for

The NHS lists other symptoms as:

If you experience any of the symptoms linked to type 2 diabetes, contact your GP.

To prevent the condition and manage blood sugar levels it’s important to make some lifestyle changes.

Eating the right foods can help. Experts recommend eating a healthy, balanced diet, keeping sugar, fat and salt to a minimum and eating breakfast, lunch and dinner every day.

People should aim to do 1.5 hours of activity a week – this can include fast walking, climbing stairs, or doing more strenuous housework or gardening.