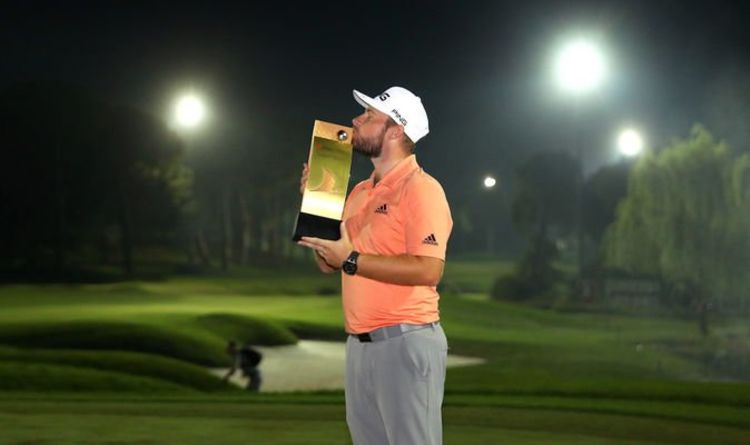 Tyrrell Hatton admits there were times he thought he would never win again before he secured a £1.56m cheque in dramatic fashion under the floodlights at the Turkish Airlines Open.

Hatton had to overcome a four-hole playoff which started with six men and finished with a shootout against Austrian Matthias Schwab to pick up his first victory since October 2017.

And the play in Antalya ran so late it became the first ever European Tour event to be contested under floodlights.

Hatton’s win at the Montgomerie Maxx Royal also virtually sees him into the Masters next year and comes as he prepares for surgery on his wrist after a nasty incident at the Masters two years ago when he slipped and collided with a metal bar.

The eventual winning putt sunk as the 28-year-old was fuming with himself for not burying the birdie chance moments before, as he had to wait on Schwab missing his for par to confirm the win.

“It’s so surreal,” Hatton said after completing a gruelling 76 holes.

“I mean, I actually can’t believe that I’ve won. It’s been quite a difficult year in terms of things happening off course, and you know, the last month, I feel like I really found my game again.

“And I said to a few people on my team that if I was lucky enough to win again, then I would definitely savour the moment, because I think it’s quite easy to take it for granted, and you know, sport’s great when it’s going well, but when it’s not going well, it kind of hits home, so I’m absolutely thrilled.”

And on the Masters as he moves from 48th to around 30th in the world he said: “That’s really exciting. I think I was well aware of my World Ranking coming into this week, and I knew that I wasn’t going to play South Africa to rest my wrist. I just really wanted to have a good day today because I felt that if I played well, then that might secure the Masters.

“And again, that’s another thing, you can’t take that for granted. It’s such an amazing tournament, and you know, I can’t wait to get that Masters invite through the post again.

“It’s a special feeling, and obviously just a bonus with what comes with doing well.”

It was Schwab against Hatton for the final playoff hole after four others –  Kurt Kitayama, Erik Van Rooyen, Victor Perez, Benjamin Hebert – had been eliminated in the previous three after the six of them tied for 20 under through regulation play.

After co-leading from the first round and solo leading from the second round all the way through, Schwab missed the birdie chance to win the tournament outright in regulation on the 18th green.