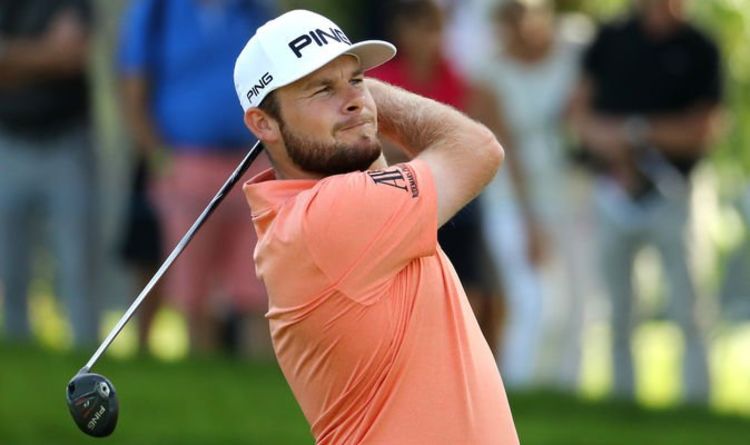 Tyrrell Hatton pocketed a cheque of £1.56m ($ 2m) after winning a dramatic four-hole six-way playoff under floodlights at the Turkish Airlines Open.

Hatton had to nervously watch on as Matthias Schwab missed the chance to extend the playoff to a fifth hole after he’d made par.

It was Hatton’s first win in over two years since the Italian Open in 2017 and came after he survived four brutal playoff rounds and a final hole shoot out against Austrian Schwab.

The victory comes despite Hatton preparing to undergo surgery on a wrist injury that has been bothering him since a nasty incident at the Masters two years ago when he slipped and collided with a metal bar.​

Hatton has been taking injections to get through the pain since but is now ready to go under the knife at the end of this season.

But he was all smiles in Turkey after playing 76 holes to grind out the win ahead of Austrian Schwab.

Hatton said: “It’s so surreal. I mean, I actually can’t believe that I’ve won. It’s been quite a difficult year in terms of things happening off course, and you know, the last month, I feel like I really found my game again.

“And I said to a few people on my team that if I was lucky enough to win again, then I would definitely savour the moment, because I think it’s quite easy to take it for granted, and you know, sport’s great when it’s going well, but when it’s not going well, it kind of hits home, so I’m absolutely thrilled.”

Schwab, 23, held a three-shot lead going into the final round but could only manage a two under par 70 on the final day as he was reeled in by Kurt Kitayama, Erik Van Rooyen, Victor Perez, Benjamin Hebert and eventual winner Hatton.

Schwab was looking for his first win on the European Tour but could only shoot one birdie on the back nine of regulation play and missed a long eagle chance on the 18th to finish at 20 under with the five others.

South African Van Rooyen did manage an eagle on the last while Hatton was furious when his second shot fell just short of the green giving him too long to seal the title outright. A birdie was enough however to get him in the playoff.

Schwab had been co-leader with Englishman Tom Lewis after the first round and then led on his own from the second round until the final hole of the final round when he found himself heading for the playoff.