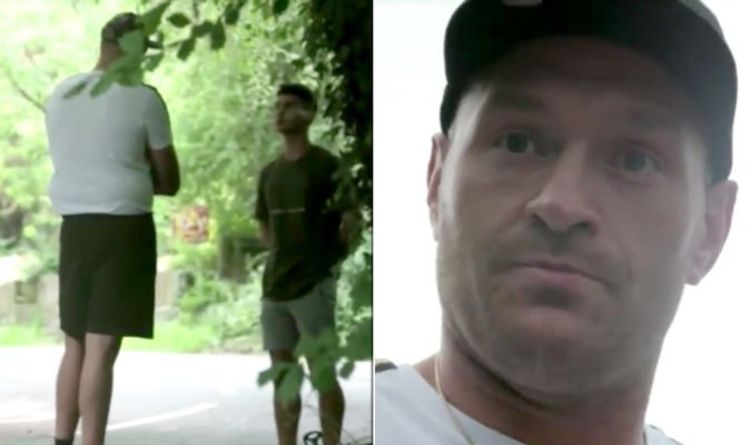 ITV viewers were treated to a special insight into the life of Tyson Fury this evening as they got to see behind the scenes of one of the world’s most prolific boxing sensations. The show followed his journey to his recent title, which he won last month, but the cameras also delved deeper into his personal life and one moment, in particular, left viewers emotional after he was spotted chatting to a fan.

Tyson recently won the world heavyweight boxing title after he beat opponent Deontay in the seventh round of their rematch last month.

Although the documentary focused heavily on his rise to glory, Tyson used the opportunity to get candid with viewers about his mental health.

The star explained his experiences with bipolar disorder and previous mental health struggles, which saw him gain 10 stone.

One moment in the show got viewers emotional after Tyson made a lovely gesture after opening up about his mental health to a fan.

READ MORE: Tyson Fury explains why Anthony Joshua is not a real champion

The world champion boxer was out on a family trip fishing with his young children when a fan of the star spotted his idol.

He asked the heavyweight champion for a photo as Tyson quickly accepted, saying: “100 per cent, get up here.”

The fan, named Colby, looked delighted to pose for a photo with his hero as Tyson asked him: “Where are you from?

He told Tyson: I’m from Milton Keynes, but I live at my dad’s in Lancaster. It’s so good to see you, that’s awesome!”

The heavyweight champion told him: “Good to see you, pal. I’ll see you around.”

As the fan walked off, Tyson made a confession to the cameras: “I’ll tell you something now, that lad is here from Milton Keynes or wherever he’s from.

“Probably his parents are split up, one lives down there, one’s here. So I would say just by speaking to him for two seconds, that he suffers from mental health problems of some sort.”

Tyson felt compelled to run after the member of the public and pulled him aside for a quick chat as the pair got candid about their experiences.

As he caught up with the fan, he said: “Just from speaking to you for two seconds, I thought to myself ‘that kid might be suffering from mental health problems of some sort.’”

He replied: “Yeah, I went through a stage where I was depressed, it was hard for me growing up, my mum was a single parent.”

Tyson admitted: “My parents split up and all that c***, and it’s not easy is it? What my advice would be, if boxing is what you’re into, then get into that.

“Put some good energy into it,” he advised before the pair parted ways and Tyson wished him all the best for the future.

Viewers at home were left touched by the moment this evening as some admitted they were in tears after the “moving” chat with the fan.

One said: “Tyson Fury chasing after that lad to talk about mental health was really moving, got a lot of time for him #TysonFury.”

- Advertisement -
Facebook
Twitter
Pinterest
WhatsApp
Linkedin
ReddIt
Email
Tumblr
VK
Previous articleThailand’s Q1 GDP will ‘not be good’ – govt official
Next articleElvis Presley daughter: Is Lisa Marie Presley an only child? Does she have any siblings?