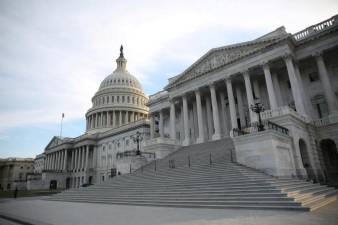 WASHINGTON: Leaders of the U.S. House of Representatives are determined to pass a $ 2.2 trillion coronavirus relief bill on Friday, or at the very latest on Saturday, hoping to provide the quickest help possible as deaths mount and the economy reels.

On a call with fellow Democrats on Thursday afternoon, Speaker Nancy Pelosi urged House members not to do anything to delay the unprecedented economic aid package that the U.S. Senate backed unanimously on Wednesday night, lawmakers and aides said.

But there were warnings later on Thursday that at least one Republican might act to delay the vote into the weekend.

Representative Madeleine Dean said the message on Pelosi’s two-hour call was “Let’s get this done tomorrow if we possibly can. If not, at the very latest Saturday.”

Dean said she would drive to Washington from her Pennsylvania district for the debate, due to start on Friday morning. “It was so obvious from everyone’s conversation on the call, we know what we have to do. We have to get relief to the American people now,” Dean said.

The Senate bill – which would be the largest fiscal relief measure ever passed by the U.S. Congress – will rush direct payments to Americans within three weeks if the Democratic-controlled House backs it and Republican President Donald Trump signs it into law.

“The House of Representatives must now pass this bill, hopefully without delay. I think it’s got tremendous support,” Trump said at a daily coronavirus briefing.

The $ 2.2 trillion measure includes $ 500 billion to help hard-hit industries and a comparable amount for payments of up to $ 3,000 to millions of families.

The legislation will also provide $ 350 billion for small-business loans, $ 250 billion for expanded unemployment aid and at least $ 100 billion for hospitals and related health systems.

The Republican-led Senate approved it 96-0 late on Wednesday. The unanimous vote, a rare departure from bitter partisanship in Washington, underscored how seriously members of Congress are taking the global pandemic as Americans suffer and the medical system threatens to buckle.

DEATHS MOUNT, MILLIONS OUT OF WORK

Pelosi told a weekly news conference she expected the bill would have strong support from House Democrats and Republicans.

The United States surpassed China and Italy on Thursday as the country with the most coronavirus cases, according to a Reuters tally. The number of U.S. cases passed 82,000, and the death toll reached almost 1,200.

The crisis has dealt a crushing blow to the economy, with thousands of businesses closing or cutting back. The Labor Department reported that the number of Americans filing claims for unemployment benefits surged to 3.28 million, the highest level ever.

Pelosi said there was no question more money would be needed to fight the coronavirus. She said House committees would work on the next phase in the near term, even if the full chamber is not in session.

House Republican leader Kevin McCarthy also backs the relief plan. But he wants it to be allowed to work before deciding on more legislation.

“This will be probably the largest bill anybody in Congress has ever voted for,” he told reporters. McCarthy predicted the measure would pass on Friday morning.

The $ 2.2 trillion bill follows two others that became law this month. The money at stake amounts to nearly half of the total $ 4.7 trillion the federal government spends annually.

Pelosi said House leaders planned to fast-track the rescue plan by passing it via a voice vote on Friday.

There could be opposition. Republican Representative Thomas Massie said he opposed the bill, and was uncomfortable with the idea of allowing it to pass on a voice vote, rather than recording how each House member voted.

“I’m having a real hard time with this,” Massie, an outspoken fiscal conservative, said on 55KRC talk radio in Cincinnati.

House leaders said late on Thursday that an unnamed House Republican might suggest a quorum is not present on Friday morning and call for a recorded vote for final passage.

Democratic Majority Leader Steny Hoyer encouraged members to be at the Capitol by 10 a.m. (1400 GMT) on Friday.

“We will see if the bill can pass by voice vote or if a Republican forces a recorded vote,” Hoyer’s office said in a statement.

The House has 430 members, most of whom have been out of Washington since March 14.

It would be difficult for all of them to return, given that two have tested positive for the respiratory disease, a handful are in self-quarantine and several states have issued stay-at-home orders. There are five vacant House seats.

The Capitol has laid out special procedures – including barring members from sitting beside one another – to minimize the threat of infection, both to members and staff. – Reuters