U.S. sticks it to World Health Organization as Xi offers... 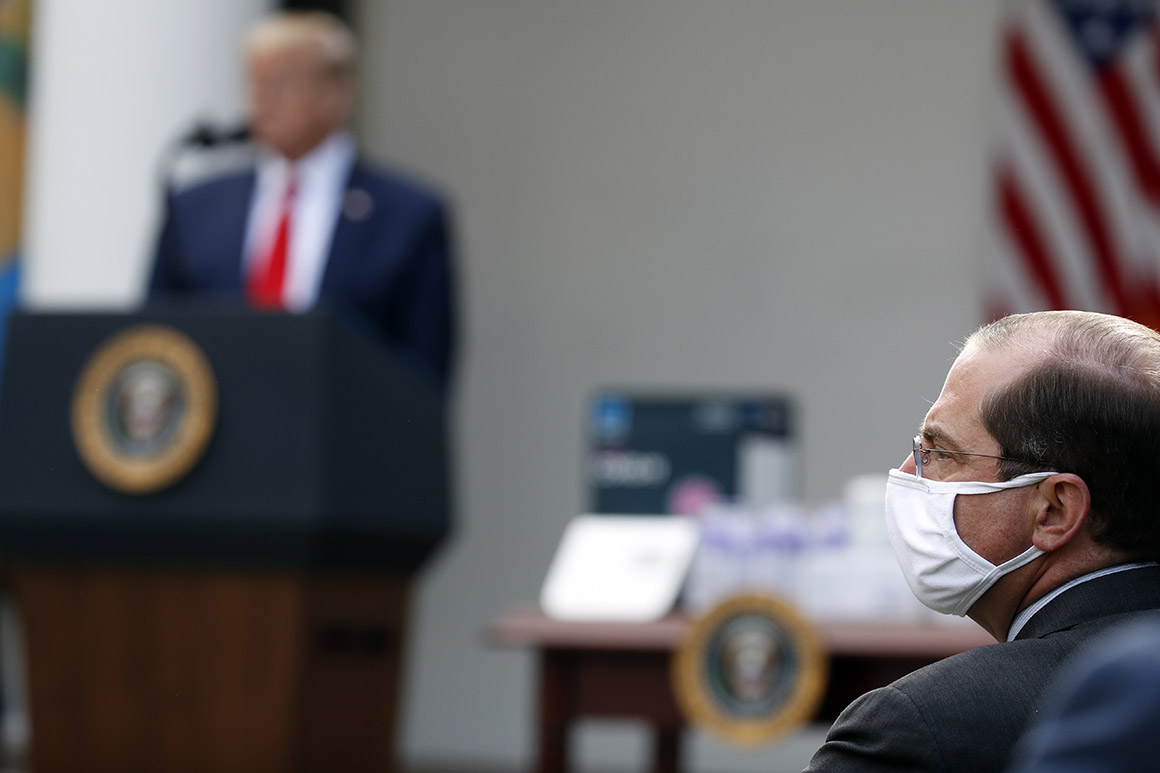 That announcement leaves the U.S. in an increasingly isolated position at the WHO, where it remains the biggest funder pending President Donald Trump’s decision to suspend payments.

In a video message to the World Health Assembly, Azar echoed Trump’s critique, citing “a failure by this organization to obtain the information that the world needed” as one of the “primary reasons this outbreak spun out of control.”

“In an apparent attempt to conceal this outbreak, at least one member state made a mockery of their transparency obligations, with tremendous costs for the entire world,” he said, blaming Beijing without naming it.

Xi expressed openness to a WHO-led inquiry into the pandemic on Monday, backing “the idea of a comprehensive review of the global response to Covid-19 after it is brought under control.”

A coronavirus response resolution on track to be adopted on Tuesday by WHO member countries calls for the WHO chief to launch a review of the response, including the global body’s actions, “at the earliest appropriate moment.”

WHO Director General Tedros Adhanom Ghebreyesus endorsed the idea Monday and pledged to initiate it.

Azar also embraced an inquiry, but with a barb, calling the status quo “intolerable” and saying the Geneva-based institution needs to be “far more transparent and far more accountable.”

“Although we are all focused on the immediate response, we need a more effective WHO right now,” he added.

Azar didn’t address Trump’s moves to defund the agency, nor did Tedros.

However, Tedros noted that reviews of previous epidemics prompted new measures or committees to drive the global response. This time, he continued, “the world doesn’t need another plan, another system, another mechanism, another committee or another organization. It needs to strengthen, implement and finance the systems and organizations it has – including WHO.”

Top European leaders invited by Tedros to help open the virtual assembly, including French President Emmanuel Macron and German Chancellor Angela Merkel, voiced support for the WHO. It also got backing from Xi, who called on the “international community to increase political and financial support to WHO.”

Xi took steps to align China with European efforts by declaring any coronavirus vaccine developed there would be a “global public good.”

China has some of the leading candidates in the global race for an immunization, with four already in human trials. While the practical implications of Xi’s commitment remain unclear, it could further isolate the U.S., which has taken steps to restrict exports of an experimental treatment and was subject of rumors that it wanted to secure exclusive access to a vaccine.

“Covid-19 vaccine development and deployment in China, when available, will be made a global public good,” Xi told the assembly. “This will be China’s contribution to ensuring vaccine accessibility and affordability in developing countries.”

Washington was among countries objecting to casting coronavirus immunization as a “global public good” in a section of the resolution on the Covid-19 response.

While the meaning of the term is subject to some debate, global public goods could be subject to weaker intellectual property protections or other measures to reduce their costs and make them more widely available.

Xi’s statement is “very significant” said Yuanqiong Hu, senior legal and policy adviser for MSF Access Campaign, which backs lower drug prices. As both an R&D and manufacturing powerhouse, China needs “to be fully on board to deliver this collective global vision.”

Yet it’s the debate at the WHA, Hu noted, that will be key to devising rules for how countries collaborate.

Ashleigh Furlong and Carlo Martuscelli contributed to this report.