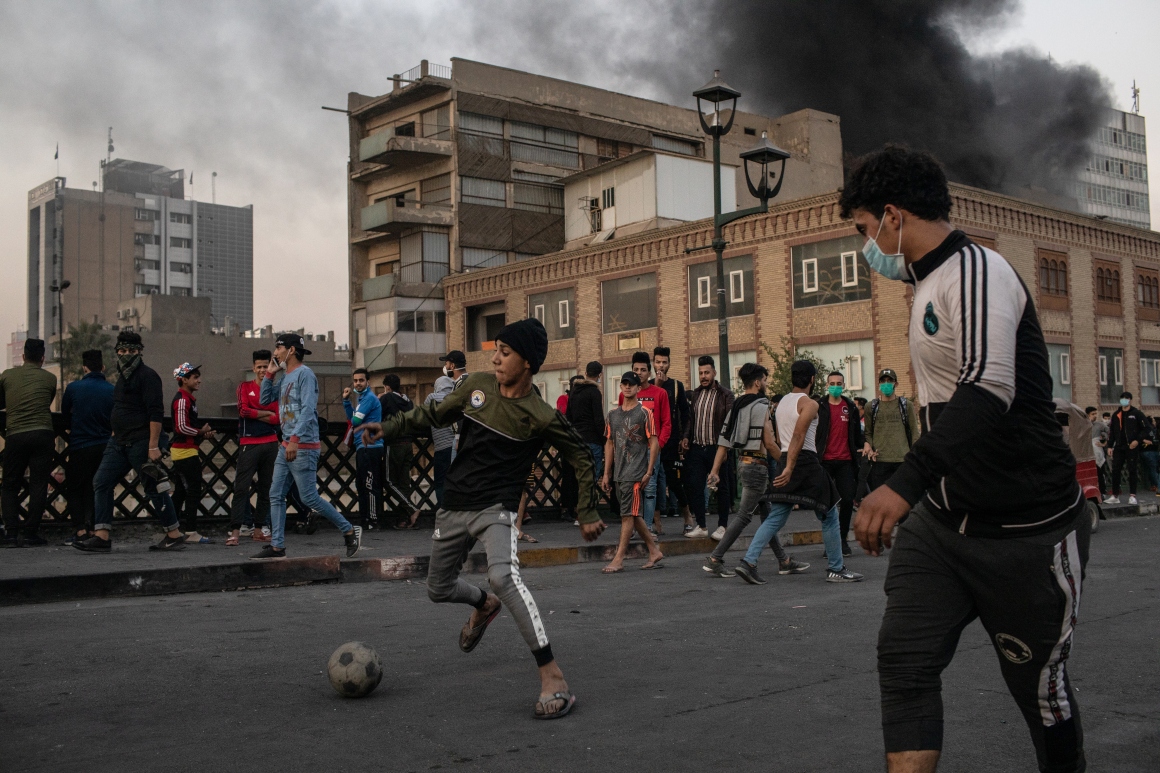 That September 2012 attack took place in the final stretch of a heated presidential campaign. Republicans used it to hammer then-President Barack Obama as he sought a second term, as well as Hillary Clinton — who was secretary of State at the time of the Benghazi events — when she ran for president in 2016.

With another presidential election a little more than a month away, a similar attack could undercut the Trump administration’s claim to have restored deterrence against Iran and successfully managed the U.S. drawdown from Iraq. Trump’s secretary of State, Mike Pompeo — one of Clinton’s most vociferous critics on Benghazi — is eyeing a future presidential run of his own. Both men are said to be deeply averse to the idea of having a Benghazi-like tragedy on their watch, with Pompeo in particular expressing concern about the safety of his team. After security forces repelled an embassy compound breach by militiamen and protesters in Baghdad in December, Trump called it the “Anti-Benghazi.”

U.S. Ambassador to Iraq Matthew Tueller has told Iraqi officials that the U.S. has learned of some sort of a direct threat, possibly involving the taking of hostages, according to one well connected Iraq analyst. The analyst wasn’t certain if that threat was aimed at the embassy or Americans outside it, however.

Iraqi leaders were given a 10-day timeframe to show progress against the militias or the U.S. would quit the embassy, the analyst said, requesting anonymity to discuss sensitive conversations. The understanding is that once U.S. diplomats have left, American forces will then feel freer to use airstrikes and other means to pound the Iran-backed armed groups, multiple people said.

“There is no bigger threat to U.S. personnel than there is in Baghdad because Baghdad cannot, will not, control the militias,” said Michael Pregent, a Middle East scholar with the Hudson Institute, referring to the Iraqi government. “They don’t have the ability, and they don’t have the willingness to do it. And that puts the U.S. mission at major risk.”

Iraq’s foreign minister, Fuad Hussein, traveled to Tehran over the weekend to talk to his Iranian counterparts, with U.S. demands believed to have been on the agenda.

An Iraqi official, speaking on condition of anonymity, said the Benghazi precedent was “on everybody’s mind,” but that Iraqi leaders were surprised by the U.S. warnings. The official argued that by closing the embassy, the Trump administration will look like it is ceding the ground to Iran and its proxies, while undercutting its struggling and under-resourced Iraqi partners.

“It’s illogical,” the Iraqi official said, noting that American diplomats stayed in Baghdad under far more dangerous conditions following the 2003 U.S. invasion, as well as during the height of the fight against the Islamic State terrorist group. “We can’t do this on an American timeframe without tearing things apart.”

Word of the discussions comes just weeks after the U.S. said it would cut its military footprint in Iraq by almost half by the end of September, with 2,200 troops coming out. The withdrawal was driven by the Islamic State’s weakening attack capability, which, already debilitated by coalition pressure, was further eroded by the Covid-19 pandemic, one U.S. military official said.

Pentagon officials initially understood the State Department’s threat to close the embassy as little more than a bluff designed to incentivize the Iraqis to do more to crack down on the armed militias putting U.S. forces at risk. But “there was not a sense we would actually pull out of the embassy,” one defense official said.

The discussions about closing the embassy are still occurring at fairly high levels at the State Department, with many in the rank-and-file having more questions than answers. Top U.S. officials were reaching out to counterparts in the region, State Department and Iraqi officials said.

Capitol Hill staffers said they were blindsided and even confused by the reports of a potential embassy closure. One congressional aide said the readouts they’d received about the recent U.S.-Iraq strategic dialogues “made it sound like a lovefest, not whatever this is.”

The State Department “keeps saying that the current Iraqi prime minister [Mustafa al-Khadimi] is a solid partner, but this seems to cut his legs out from under him,” the aide said. He added that the potential for escalating the conflict is even higher if the U.S. ramps up its operations against the militias after closing the embassy.

Still unclear is how the U.S. may define “closure.” It’s unknown, for instance, whether the U.S. would fully depart, or leave behind any Americans, including potential security guards to watch the grounds, which cover an area roughly the size of Vatican City. One option that could be taken is to close the U.S. embassy, which cost more than $ 700 million to build, but shift much of its activity to the U.S. consulate in Erbil in Iraq’s Kurdish region.

Iranian threats against U.S. forces, particularly in Iraq, have grown in recent weeks after a months-long lull due to the coronavirus pandemic, which pummeled senior Iranian leaders and ordinary civilians alike. Tensions between Washington and Tehran nearly erupted into all-out conflict in January, after a U.S. drone strike killed a top Iranian general, Qassem Soleimani, as he visited Baghdad. Iran retaliated by firing a barrage of Iranian ballistic missiles at two bases housing U.S. troops in Iraq, causing dozens to suffer traumatic brain injuries. Tehran has said it plans more revenge.

At the time, Pompeo said that by killing Soleimani, the United States had restored “deterrence” against Iran. In the months since, however, that claim has also come into question, with the threats against the U.S. Embassy in Baghdad being the latest test.

The U.S.-led coalition fighting the Islamic State in Iraq and Syria has seen an uptick in small-scale attacks against the Iraqi Security Forces in the last calendar year, though there has been no similar increase in larger, “catastrophic” incidents, said coalition spokesperson Col. Wayne Marotto. The armed groups, believed to be backed by Iran, are attacking Iraqi civilians as well as ISF sites, he said.

“We have had more indirect fire attacks around and against our bases the first half of this year than we did the first half of last year,” Gen. Frank McKenzie, the commander of the U.S. Central Command, said recently, though he noted the attacks have not hit their targets.

Asked for details and comments about the U.S. plans for the embassy, including whether Pompeo has Benghazi on his mind, a spokesperson for the State Department declined to discuss the secretary’s private conversations.

“However, the United States will not tolerate threats to our men and women serving abroad and we will not hesitate to take any action we deem necessary to keep our personnel safe,” the spokesperson said in a statement. “We have made the point before that the actions of lawless Iran-backed militias remains the single biggest deterrent to stability in Iraq. It is unacceptable for Iran-backed groups to launch rockets at our embassy, attack American and other diplomats, and threaten law and order in Iraq.”

U.S. officials allege that Iran’s political and military influence in Iraq goes too far, putting American lives at risk. But every U.S. move to undercut Iran in Iraq risks a bloody reaction. In late December, for instance, after a U.S. airstrike on a militia aligned with Iran, dozens of militiamen and their backers broke into the U.S. embassy compound in Baghdad, setting fire to a reception area. In fall 2018, Pompeo ordered the closure of the U.S. consulate in the southern Iraqi city of Basra, citing threats from Iran.

Iraqi leaders note they’re the ones who inhabit the region, and that the U.S. needs to calibrate its moves against their neighbor. The Trump administration’s decision to kill Soleimani infuriated many top Iraqis and led to calls for Iraq to expel U.S. troops.

The Iraq analyst argued that a U.S. decision to shutter the embassy would be “crazy” because it might look like Iran had successfully pushed America out. “This is the posthumous victory of Qassem Soleimani,” the analyst said, referring to the late Iranian general, who oversaw much of Iran’s military activity beyond its borders.

Pregent disagreed. He said the real rationale behind the embassy closure threat was to get Iraqi officials to stand up to the militias, and in effect the Iranians. Besides, he argued, Iran doesn’t necessarily want the U.S. to end ties with Iraq because it relies on Iraq as an economic lifeline. An Iraq without U.S. support damages Iran, he said.

He admitted, however, that closing the embassy is a gamble.

“This may be an accidental stupid move by the administration,” Pregent said. “I like it, because it’s a leverage play, but they may not know what they’re doing.”