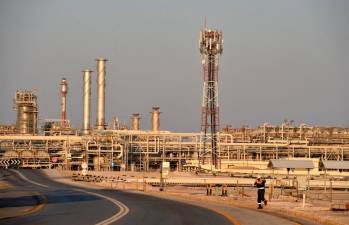 DUBAI: The United Arab Emirates (UAE) followed Saudi Arabia today in promising to raise oil output to a record high in April, as the two Opec producers raised the stakes in a standoff with Russia that has hammered global crude prices.

Oil prices fell after Saudi Arabia and the UAE announced their plans to boost production capacity and Opec and the US Energy Information Administration cut oil demand forecasts because of the coronavirus outbreak.

The extra oil the two Gulf allies plan to add is equivalent to 3.6% of global supplies and will pour into a market at a time when global fuel demand in 2020 is forecast to contract for the first time in almost a decade due to the coronavirus outbreak.

Oil prices have almost halved since the start of the year on fears Opec states would flood the market in its battle with Russia after Moscow rejected Opec’s call last week for deep output cuts and a pact on cutting output that has propped up prices since 2016 collapsed.

Saudi Arabia, which has already announced it would hike supplies to a record 12.3 million barrels per day (bpd) in April, said today it would boost production capacity for the first time in more than a decade.

UAE national oil company ADNOC said in its announcement that it would raise crude supply to more than 4 million bpd in April and would accelerate plans to boost its capacity to 5 million bpd, a target it previously planned to achieve by 2030.

By raising supplies, Riyadh and Abu Dhabi will add a combined 3.6 million bpd of extra oil in April to a market already awash with crude, compared to their existing output that has been limited by the pact with Russia that expires in March.

Russian Energy Minister Alexander Novak said today raising output was “not the best option” and said Moscow was still open to dialogue with the Organization of the Petroleum Exporting Countries.

Opec member Algeria said intense discussions were under way and UAE Energy Minister Suhail al-Mazrouei called for a new pact on supplies. But Saudi Arabia said on Tuesday talks were pointless unless they were going to lead to a deal.

“The company is exerting its maximum efforts to implement this directive as soon as possible,” Nasser said.

No time frame was given for the plans, which will require billions of dollars of investment.