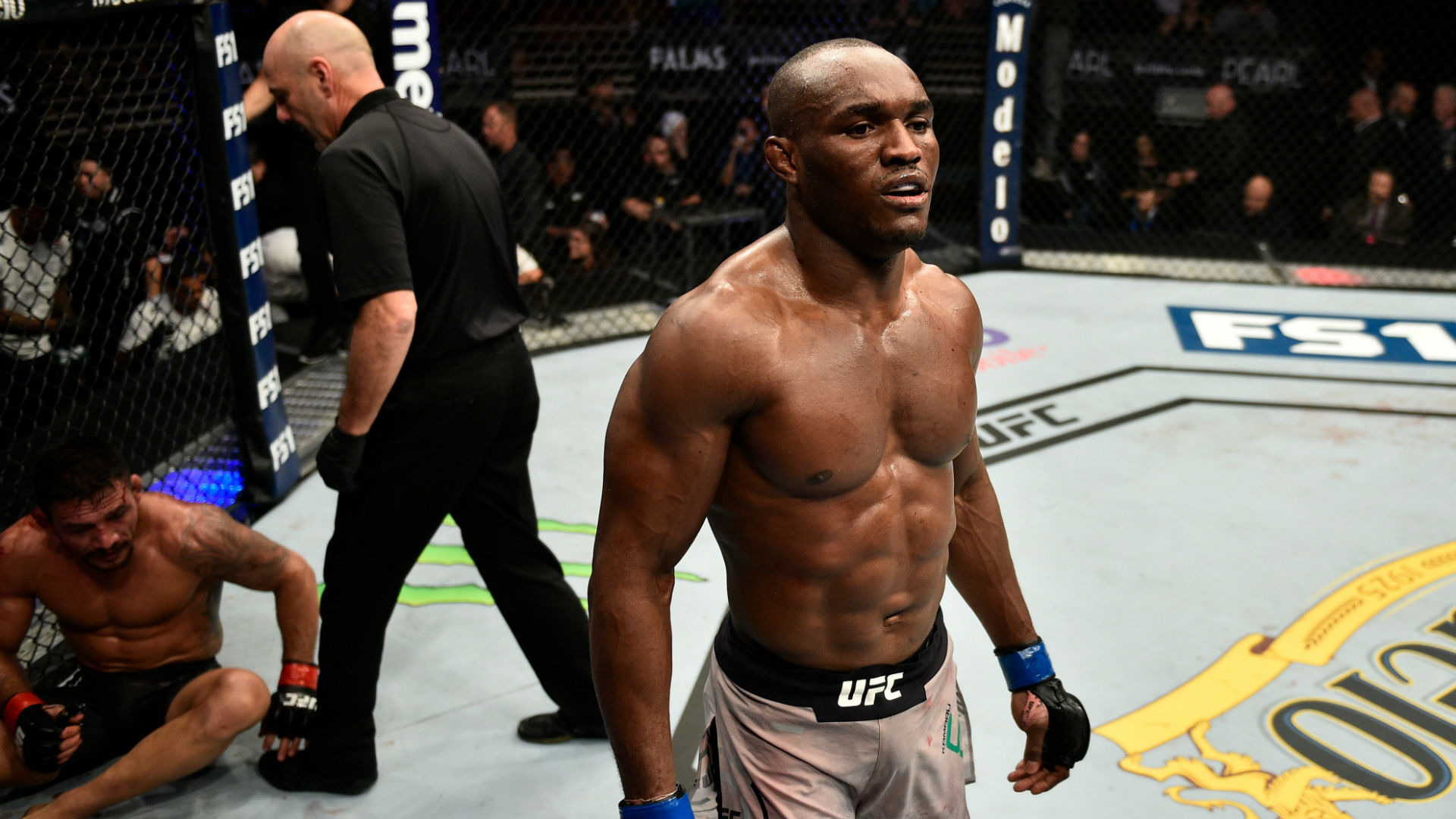 After spending a month at the UFC Apex in Las Vegas, the UFC will head to Yas Island in Abu Dhabi for UFC 251 and a trio of world title fights.

The event will kick off “Fight Island” as the UFC relocates to Flash Forum in Abu Dhabi in an effort to stage events featuring international fighters during the COVID-19 pandemic.

MORE: Jorge Masvidal happy with what he’s getting to fight Kamaru Usman

Usman is coming off of a 2019 campaign that saw him end Tyron Woodley’s title reign in dominant fashion at UFC 235 and followed that performance with a fifth-round TKO of Colby Covington at UFC 245.

Masvidal steps in on short notice to replace Gilbert Burns, who tested positive for COVID-19 a week before the fight. This comes after Masvidal and the UFC were in a standoff regarding fighter pay, and the MMA promotion decided to go with Burns as Usman’s opponent on “Fight Island.” However, with the UFC in a bind due to Burns’ positive coronavirus test, Masvidal reentered the picture, and the two sides quickly came to an agreement.

It’s the fight everyone wanted as Usman and Masvidal have been embroiled in a heated feud since January, when the two were involved in a shouting match on media row during Super Bowl week in Miami.

Now they will get to settle their differences as the UFC welterweight champion faces the “BMF” titleholder.

In the co-main event, Alexander Volkanovski looks to prove that his upending of Max Holloway for the UFC featherweight championship in December was no fluke when he takes on arguably the greatest 145-pounder the UFC has ever seen in a rematch. Volkanovski has yet to taste defeat in the UFC and will look to get his ninth straight victory. Holloway enters the fight losing two of his past three fights after winning 13 straight from 2014 to 2019. Can Holloway get revenge and regain the title, or is Volkanovski the true king of the featherweight division?

Petr Yan and former UFC featherweight champion Jose Aldo will battle for the vacant UFC bantamweight championship that Henry Cejudo relinquished when he retired in May. Yan is undefeated during his UFC tenure but will have to get past an all-time great who will look to win a world title in a second weight class.

Aside from the title fight, UFC 251 will also feature a rematch between a pair of former women’s strawweight champions as Rose Namajunas will look to get her revenge against the woman who took the title from her when she faces Jessica Andrade. Paige VanZant competes in what she has called the most important fight of her career when she faces Amanda Ribas in her final fight on her UFC contract.

Here is everything you need to know about UFC 251, including the time, odds, full fight card info and how to watch the event.

UFC 251 takes place Saturday, July 11, with the main card beginning at 10 p.m. ET, which is 6 a.m. local time in Abu Dhabi. Usman and Masvidal are expected to hit the Octagon about 12:15 a.m. ET, although the exact time depends on the length of the earlier fights.

How to watch UFC 251: Usman vs. Masvidal

In the United States, the UFC Fight Pass prelims, beginning at 6 p.m. ET, will be simulcast on UFC Fight Pass, ESPN, ESPN Deportes and ESPN+ in English and Spanish. The prelims will continue exclusively on ESPN and ESPN+ at 8 p.m. ET. The ESPN+ pay-per-view main card will kick off at 10 p.m. ET.

In Germany, Spain and Italy, the early prelims and prelims are on UFC Fight Pass, and the main card is available at 4 a.m. CET (Sunday) on DAZN, the global sports streaming service, and UFC PPV on UFC Fight Pass.

You can learn more about how to watch in other countries at UFC.com.

How much does UFC 251 cost? PPV price for Usman vs. Masvidal

Pricing globally varies, depending on region and platform.

Where is Fight Island?

One of the emirate’s most popular leisure entertainment destinations, Yas Island also has hosted the Formula 1 Abu Dhabi Grand Prix since 2009 at Yas Marina Circuit.

There will not be fans in attendance because of the coronavirus pandemic.

What is Fight Island?

The idea of “Fight Island” originated when the coronavirus pandemic shut down the sporting world and left the UFC scrambling for a new location to host UFC 249, which was originally scheduled for April 18 at the Barclays Center in Brooklyn, N.Y.

The highly anticipated event was slated to be headlined by a lightweight title showdown between Khabib Nurmagomedov and Tony Ferguson that had been scheduled and canceled for various reasons on four previous occasions — and White insisted this time the fight was going to take place no matter what.

However, with the pandemic spreading, Nurmagomedov would end up stranded in Russia due to a travel ban that saw his country close its borders. Justin Gaethje would step in on short notice, but UFC 249 was still without a location.

White attempted to relocate the event to California but was met with adversity, and he finally postponed UFC 249 after his hand was forced by ESPN and Disney to “stand down.” The event was later rescheduled for May 9 in Jacksonville.

Amidst the scramble to try to keep UFC 249 together, White announced to ESPN that he had secured a private island to stage fights during the pandemic.

The location has been called “Fight Island,” and the UFC moved forward with applying for a patent for it and is selling “Fight Island” merchandise on the official UFC website.

The plan for “Fight Island” is to be a location that will host international fights. With travel restrictions preventing fighters from other countries to enter the United States, White concocted the idea to hold UFC events at the undisclosed location to get around those travel issues.

Yas Island has all of the necessary infrastructures to hold a major event, and White delivered on his promise to have an Octagon on the beach.

In a press release, the UFC said there will be a safety zone within the nearly 10-square mile Yas Island that will include an arena, hotel, training facilities, and dining establishments. The safety zone will only be open to UFC athletes and their coaches; UFC staff and other event personnel; and Yas Island employees who are necessary to ensure the operation of the facilities.

“Fight Island” events will take place without fans in attendance.

Usman vs. Masvidal odds for UFC 251