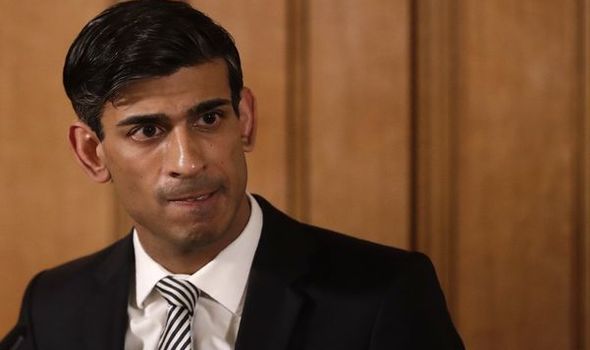 The shocking figures underlie the extent to which the lethal virus is laying waste to the economic landscape and plunging the country into financial chaos. Jan Vlieghe, a Bank of England Director, warned that the UK may be about to experience the worst recession in its history. Mr Vlieghe, who sits on the panel that sets the Bank’s interest rates, told the Daily Mail: “We are experiencing an economic contraction that is faster and deeper than anything we have seen in the past century, or possibly several centuries.”

The sheer havoc being wreaked by COVID-19 on the economy was laid bare in a report published by the Office for National Statistics (ONS).

The worst affected sectors include hospitality, entertainment and tourism, where the majority of theatres, cinemas, hotels and restaurants have been forced to close their doors to business.

The survey found that a staggering 94 percent of businesses have applied for help from government furlough schemes.

As many as four out of five firms are interested in the government’s Coronavirus Job Retention Scheme.

HM Revenue and Customs said that 435,000 firms had applied for the bailout package in three days since its launch on Monday.

In effect, the government is now paying the wages of 3.2 million private sector workers at a cost to the Treasury of £3.75 billion.

Some analysts fear that the total bill could rise to as high as £60 billion, placing enormous strain on government finances.

JUST IN: Back in business! How UK carmakers are returning to work

To further compound the gloomy news, labour market experts David Blanchflower and David Bell have predicted in a report published by the National Institute of Economic and Social Research that unemployment in the UK will rise by five million to six million by the end of May.

This would represent an increase in the unemployment rate from 3.9 percent to 20 percent, a figure that would rival the jobless rate in the United States, which has seen 22 million lose their jobs in the last month.

The dire consequences of dealing with the economic fallout is also set to see government debt levels explode.

The Institute for Fiscal Studies said the “absolutely colossal” bill to deal with the outbreak will send Treasury borrowing to “a level not seen in peacetime”.

Paul Johnson, director of the spending watchdog, warned the Government deficit would hit £260billion this year, well above the £60billion that was expected before the outbreak.

Output could shrink by as much as 35 percent by June, if the lockdown restrictions are not eased before the summer, according to analysts.

A survey conducted by the research group HIS Markit has shown that the two pillars of the UK economy, manufacturing and services, have seen the fastest contraction on record this month.

Chris Williamson, the group’s chief economist, said that the dire economic news would place more pressure on the government to end the lockdown as soon as possible.

In further bad news for the economy, a leading estate agency has predicted that there will be over half a million fewer house sales in 2020.

The fall is sales will deprive the Treasury of £4.4 billion in lost income from stamp duties, as well as having a significant impact on spending in related industries.