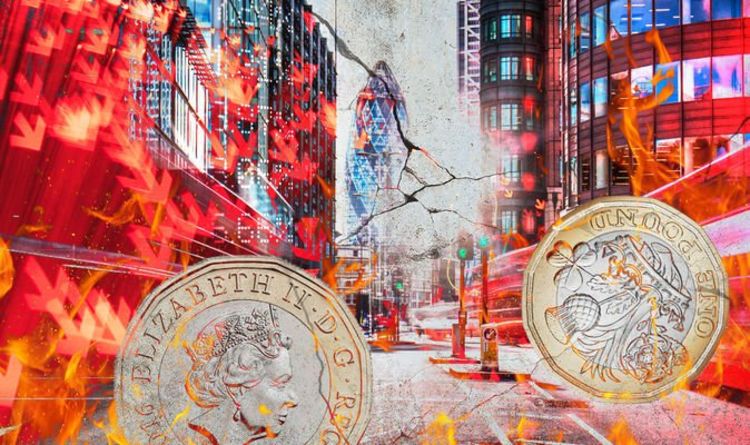 The UK economy is shrinking at a record pace as businesses across the services sector shut up shop as millions of Britons feel the economic bite of the coronavirus pandemic, which is spreading panic across the globe. Experts have warned the nation could plunge into a deep recession – deeper than the 2009 financial crisis and one of the most severe since 1900.

Experts predicted the economic contraction would be bigger than 6 per cent this year, compared to 2009 when it was 4.2 per cent – a deepr contraction than during the Great Depression in 1900s.

At the worst point of the 2008-09 recession, Britain’s economy shrank 2.1 percent in a single quarter.

The Financial Times examined the property market, declining electricity consumption, consumer spending and job losses to lay bare the financial implications the UK faces in a time of crisis.

Shock figures from the Department for Work and Pensions revealed that nearly 1million people applied for universal credit in the last two weeks of March as people are left unable to work during COVID-19 pandemic.

After Prime Minister Boris Johnson introduced the UK lockdown, electricity consumption slumped 10 per cent in the last week of March, despite a lower mean temperature than in the same month last year.

Meanwhile, experts predict consumer spending will be hit hard as people are forced to cut back and save their pennies and cinemas, restaurants, bars, and gyms were forced to shut their doors amid the UK-wide lockdown to contain the spread of the virus.

Meanwhile, the housing market has also been hurt by the COVID-19 pandemic.

Online property webiste Zoopla revealed there had been a 40 percent drop in demand at the end of March.

Richard Donnell, Zoopla research director, said: “Demand for housing to buy and rent has fallen sharply since the end of the first week in March.

“It has now started to bottom out at levels more closely associated with the Christmas holiday period.”

It comes after experts told how house prices have been brought to an “abrupt standstill” as experts expressed fears more than 500,000 house sales would be lost amid the coronavirus pandemic.

Halifax said the average house price across the UK was £240,384 in March, changing little from a record high of £240,461 in February, while estate agent Knight Frank predicted that nearly 526,000 house sales will be “lost” if the UK remains in lockdown amid the coronavirus outbreak.