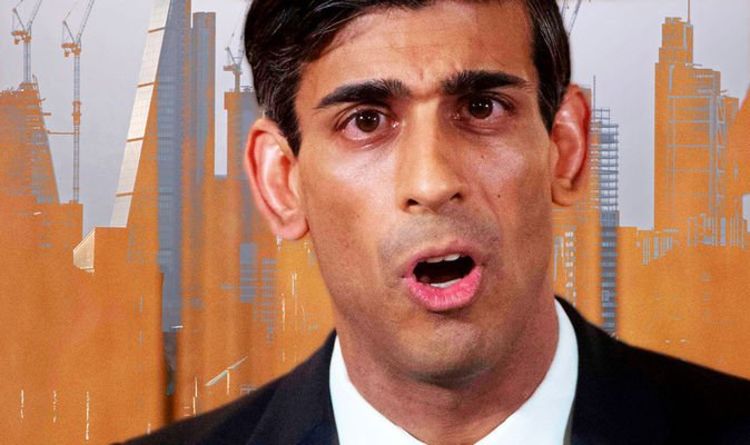 Chancellor Rishi Sunak discussed the possibility with ministers of a “25 per cent to 30 per cent” fall in the second quarter of this year, according to a report from The Times. That would be a huge increase on the economic predictions made for the UK by city analysts as the braces for an immediate hit on its financial growth. They have forecast an average 14 percent contraction in the economy caused by the current coronavirus lockdown, which has now been in place for three weeks.

But some banks are predicting a drop of 24 percent, with the Treasury now currently completing its own analysis.

Businesses have been forced to close in a move that has triggered a collapse in the jobs market, with more than one million people already out of work as a result.

Schools have also been shut, throwing plans for the end of the academic year and resulting exams into disarray.

Last week, financial experts told Express.co.uk the UK economy could shrink by 25 percent over the coming months as the disastrous impact from huge coronavirus spending kicks in.

One minister told The Times: “People have followed the instruction to stay at home to the nth degree. Businesses have closed down, schools have closed down. This was far more than anticipated by the modelling.

“It’s important that we don’t end up doing more damage with the lockdown. We’re looking at another three weeks of lockdown and then we can start to ease it.”

The latest gloomy forecast comes as the Government prepares to review the current lockdown restrictions, with the Cabinet split over if and how they should be lifted.

Ministers pushing for the lockdown measures to be eased next month, including a desire to reopen schools before half-term, are said to include Mr Sunak, Home Secretary Priti Patel, Transport Secretary Grant Shapps and Education Secretary Gavin Williamson.

But those said to cautioning against a lifting in the restrictions include Health Secretary Matt Hancock and Cabinet Office minister Michael Gove.

Scientific advisors are meeting on Tuesday to discuss the latest evidence and the impacts the lockdown has had so far, before a decision is made on Thursday whether to extend it.

However, The Times said it has been told by sources close to this group the review is a “formality” and it will be extended for at least another three weeks.

The UK is now entering a fourth week of lockdown measures across the country, introduced by Boris Johnson and his Government on March 23.

One minister told The Times that Downing Street has been pleasantly surprised the level of compliance by the public.

They said: “The British people have been pretty good in following instructions. That’s shocked No 10.

“But there comes a point once the peak is out of the way that we’ve got to trust people.”

The minister also explained how it is currently difficult to take a decision on easing the lockdown now, especially with the Prime Minister himself still recovering from coronavirus.

But the source said: “Dominic Raab doesn’t chair the cabinet, he acts as a convenor.

“He is not filling the vacuum left by Boris. The cabinet has not had any discussion about it.”