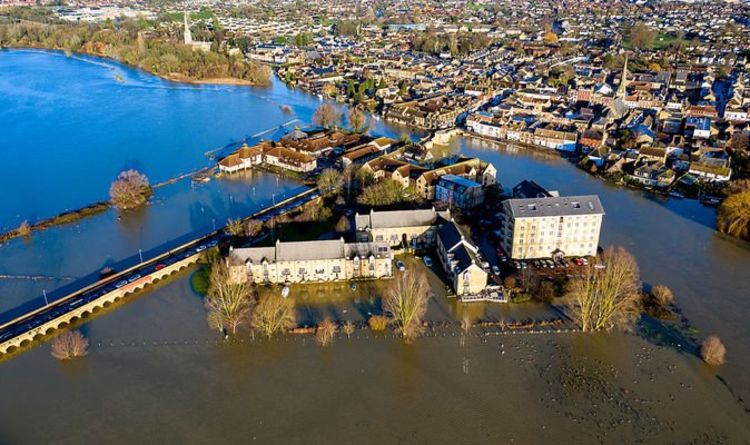 The Met Office issued a yellow weather warning for southern areas of the UK, with more than an inch of rainfall expected in some places before midday today.

More than 230 flood alerts and 100 flood warnings were put in place over the weekend and more chaos could be on the way with rain forecast in the coming week, causing a washout over Christmas.

There was even a tornado along with the rain in Surrey. Trees were brought down on cars, the winds flipped over vehicles and the roofs of more than 20 homes were damaged in and around Chertsey.

Rainfall throughout Friday and yesterday saw the River Darent burst its banks in Kent, causing water to wide spread in Eynsford, along with the River Medway which left the village of Yalding submerged.

And in Cambridgeshire the River Great Ouse burst its banks, surrounding the market town of St Ives.

Rail bosses said the forecast deluge may cause disruptions to train services including Great Northern, Gatwick Express, Thameslink and Southern until midday today.

Met Office forecaster Marco Petagna said yesterday: “There’s potential for further transport disruption, with flood warnings and alerts, showers on Sunday in the West, rain on Monday affecting much of England and Wales and rain at times on Christmas Eve in the Midlands and South.

“Allow extra time for journeys, watch out for standing water and do not drive through flood water.

“Wet and windy weather is likely on Boxing Day and Friday, with more unsettled weather on New Year’s Eve and New Year’s Day, especially in the North and West.”

Highways England urged motorists to adapt their driving for wet weather by slowing down, keeping their distance and easing off the accelerator if steering becomes unresponsive.

Forecaster John Hammond of Weathertrending said snow will fall – but only in the Highlands.

He said: “Christmas week starts with further blustery showers but it turns chilly through the festive period and snow will begin to fall across the Highlands by Christmas Eve.”

ByOne passenger shared a video of fire engines greeting the plane's arrival in Heathrow, adding: "That was a long 10-minute emergency landing." Passengers have...
Read more

ByFirst lady Melania Trump appeared to express astonishment over Vogue magazine's decision to feature Beyoncé on the cover of its September 2018 issue and...
Read more