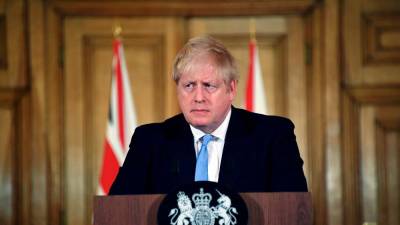 LONDON: British officials said Monday they had opened a probe into an illegal website claiming to sell a cure for the novel coronavirus, which came to light during an AFP fact-checking investigation.

AFP reporters in Lagos discovered the UK-registered site while examining a WhatsApp message spreading around Nigeria with the claim that an anti-malaria drug could heal Covid-19 — the disease caused by the new coronavirus.

Britain’s Medicines and Healthcare products Regulatory Agency (MHRA) confirmed the website was not an officially licensed supplier for the drug.

“This website is now under investigation by the MHRA,“ it said in a written statement to AFP.

In the two-minute WhatsApp voice message, an unidentified sender alleges that Chinese and French doctors recommend taking 500 mg of chloroquine phosphate for eight days to “overpower the coronavirus”.

The man, speaking English in a Nigerian accent, urges people to “rush to any pharmacy” and buy the drug.

The message featured a picture of a box of chloroquine phosphate tablets.

Further investigations revealed that the site was registered in the UK on Feb 28 — around the same time that the WhatsApp message started to spread across Nigeria.

The website bills itself as belonging to an organisation called Viral Medications UK, but there is no further online trace of the alleged group.

‘No regard for public health’

The MRHA warned it would act against “those who act with no regard to public health”.

“The illegal supply of medicines is a criminal offence,“ the agency said.

“Websites offering to supply prescription medicines without a prescription are not only breaking the law but are putting the health of patients at risk.”

The MHRA added that it had shut down more than 26,000 websites involved in the illegal sale of medicines in Britain and removed more than 20,000 adverts and social media accounts over the past decade.

Shortly after the agency’s statement, the website was no longer available.

Chloroquine phosphate is one of several drugs being tested for their efficiency in the fight against the global coronavirus epidemic, which erupted in China in Dec 2019.

Chinese scientists said in early February that it had shown “apparent efficacy” in treating Covid-19.

However, the World Health Organization (WHO) has since said there is no proof that chloroquine is an “effective treatment at this time”.

Nigeria banned chloroquine in 2005 after the WHO warned of high treatment failures and drug resistance in some parts of the world.

False or misleading claims over the drug are part of a much broader wave of misinformation regarding the coronavirus outbreak.

Facebook
Twitter
Pinterest
WhatsApp
Linkedin
ReddIt
Email
Tumblr
VK
Previous articleThe biggest threat to your Android phone has been revealed – ignoring it could cost you
Next articleBank of England cuts rates to 0.25% in shock move over coronavirus