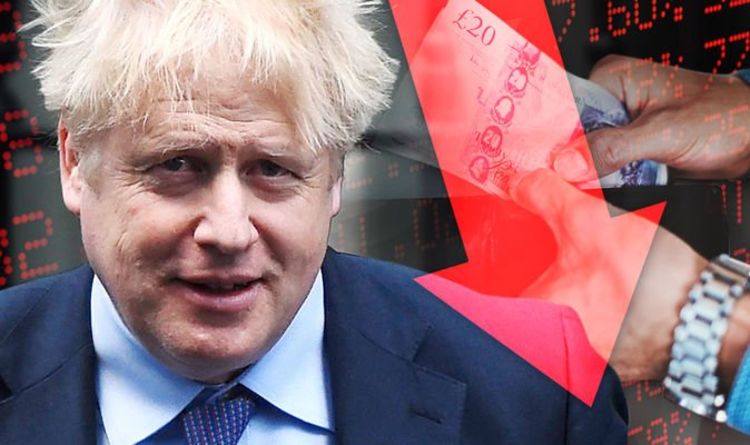 Last month, Rishi Sunak announced a £330billion bailout for businesses in a move to drastic “wartime” measures to fight the coronavirus outbreak. The Chancellor scrapped business rates for a year and promised cash grants for shops, pubs and other high-street outlets hit by the slump in customers. He has also made a number of other spending pledges totalling hundreds of billions of pounds, including attempted protection for the self-employed and households struggling to pay bills.

But companies are being forced to temporarily close and some forced out of business altogether – triggering a huge collapse with millions of jobs already lost.

There are increasing fears the nation could plunge into a massive recession – deeper than the 2009 financial crisis and one of the most severe since 1900 – with Mr Sunak warning of a 35 percent collapse in GDP for the current April to June quarter.

During his Spring Budget last month, it was forecasted the UK’s public debt for the coming year would be £55billion, but economic experts have warned of much worse to come, with the impact blowing a significantly bigger hole in the economy compared to the financial crisis in 2008.

“That over a million people have already registered for Universal Credit shows that the situation is pretty bad anyway, but what is going to cause concern is that the costs of keeping people in employment in the hope that this is a short-term crisis, already estimated at well over £120billion, will continue to spiral.

“Reports that the costs of ‘furloughing’ maybe three times more expensive than was estimated indicate that the economic cost of COVID-19 will be eye-watering and leave a public debt that will make that left after the Global Financial Crisis of 2008 look small.

“Whilst there is an argument that this country did not act as rapidly or as decisively as might have been suggested by the early scientific evidence, the concern now is that there is no exit strategy from the lockdown we’re experiencing. What this means is that we could remain in what is a form of paralysis for months to come.

“If so, the economic cost to us in terms of lost production, calculated by the Centre for Economics and Business Research as being £2.4billion a day, as well as the cost of paying for people to remain at home, will keep ratcheting up.

He added: “Higher taxes in the future will, of course, reduce the amount that people have in terms of disposable income which may result in the cutting of consumption. Equally dangerous, especially if because of closures due to the current crisis, certain good is in short supply.

“This can cause inflation to spike which, unless, incomes are raised relatively, and it’s a certainty that many businesses and organisations will be looking to control costs, will reduce spending power by households and, as a consequence, overall consumption.”

The TaxPayers’ Alliance has also warned the Government that raising taxes on Britons to pay for the huge coronavirus spending would be “totally disastrous”.