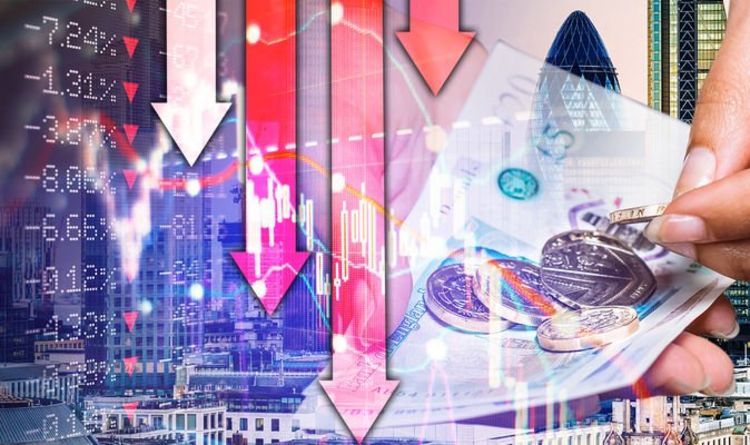 The coronavirus pandemic is having a huge effect on the UK economy, as sectors of the economy, such as the retail and hospitality sector, grind to a halt amid the nationwide lockdown. The knock-on impact of the outbreak is starting to hit UK GDP, as one economist has suggested it contracted by up to five percent in March alone – just at the start of Britain’s coronavirus outbreak. But the worst is yet to come, as more than a dozen top economists estimate UK GDP will drop by an average of 14 percent in the April-June quarter.

As a result, he predicted UK GDP would fall a whopping 13 percent in the next quarter.

14 of the top economists, who are surveyed every month by the Treasury, estimated GDP would contract by an average of 14 percent.

But the forecasts vary hugely, with JP Morgan predicting a modest contraction of 7.5 percent and Capital Economics’ calculating a drop of 24 percent.

Half the predictions seen by the BBC are between -13 and -15 percent.

The forecasts suggest the coronavirus pandemic will have a significant impact on the UK economy, as quarterly figures typically move by fractions of a percent.

For example, the average forecast for this quarter, from January to March, was a fall of just 0.2 percent.

But economists do predict the economy will rebound, with Mr Archer suggesting the recovery can begin in the third quarter.

Yet the effects of the pandemic are likely to hit annual UK GDP.

13 of the 14 economists forecast annual GDP would fall anywhere between -6 and -12 percent across the full year.

The average annual contraction was 7.4 percent.