The British Retail Consortium (BRC) made the warning in a letter to Chancellor Rishi Sunak and small business minister Paul Scully, according to the Financial Times. The letter, which was also signed by the British Property Federation and Revo, stated that the current measures put in place by the government to support businesses would not be enough to stop firms from collapsing. 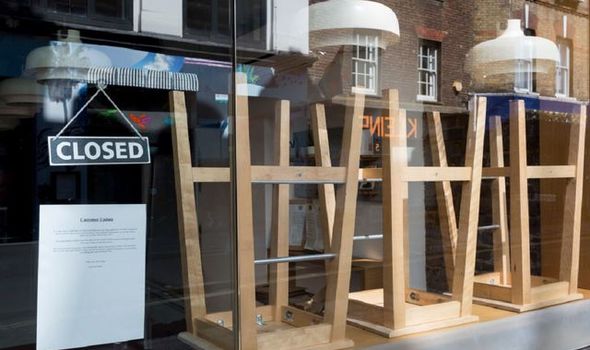 Many businesses across the UK are shut due to lockdown measures. (Image: Richard Baker / Getty)

Reuters reports that a part of the letter reads that the crisis “facing parts of the retail sector … must be addressed urgently ahead of the June quarter [rent] day”.

The letter reportedly adds that while employee wages are mostly protected by the government at the moment, property costs are still an issue.

And it said that many businesses which run on tight margins have had little to no income for many weeks, Reuters adds.

The BRC called for a meeting with Paul Scully as well as various other government officials such as the Treasury to decide how to move forward.

Dickinson said: “We share the view of the Prime Minister that safety is what counts when determining when shops can reopen.

“Already retailers around the country are working on plans for reopening safely and with all necessary social distancing measures in place.

“Further clarity is needed in coming days and we look forward to more details from the Government.

“We need a plan for shopping as well as shops – this means a plan that allows safe navigation both to and through our retail centres – and we look forward to continuing to work closely with the Government to support this process.”

Boris Johnson said yesterday that the country “may be in a position” to see a gradual reopening of shops by June 1 at the earliest.

Schools might be able to reopen for some primary school pupils in reception and years one and six at the same time, the Prime Minister added.

Johnson said that the country must “continue to control the virus and save lives,” but said that “we must also recognise” the “colossal cost to our way of life” that has been caused by the fight against Covid-19.

“We can see it all around us is the shuttered shops and abandoned businesses and darkened pubs and restaurants,” he said.

But Paddy Lillis, General Secretary of the Union of Shop, Distributive and Allied Workers (USDAW) said in a statement yesterday that non-food retail “should only start trading again when expert public health advice agrees”.

He added that “even then we must have a guarantee that the right policies and practices are in place to make workplaces safe.”

Lillis said that USDAW and the BRC have developed joint advice and guidance for the non-food retail sector.