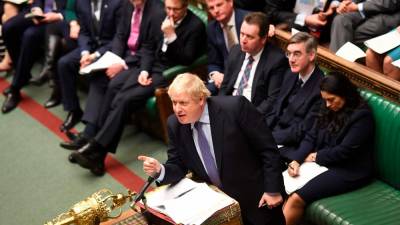 LONDON: Britain will publish its objectives for post-Brexit trade talks with the European Union on Thursday, with the two sides clashing over standards and fishing rights before negotiations have even begun.

Two days after EU ministers approved their own joint approach, Prime Minister Boris Johnson’s government will set out its priorities for the talks starting Monday.

When Britain left the European Union on Jan 31, both sides agreed a transition period in which little changed while they struck a new trade and security partnership.

But the clock is ticking – the transition only lasts until Dec 31 – and both sides are so far talking tough.

A key sticking point is the EU’s demand that Britain mirror its standards if it wants to continue freely trading its goods with the bloc’s huge single market.

London says it will not bind itself to following EU rules, saying the whole point of Brexit was to secure “economic and political independence”.

Brussels also wants to maintain the right of its fleets to fish in UK waters, something London has rebuffed, despite EU warnings that failure to agree on this could scupper the wider trade talks.

Johnson, recently elected on a promise of ‘Getting Brexit Done’, has called for a looser trade agreement along the lines of the bloc’s trade deal with Canada.

It fears Britain could undercut EU businesses if it decides to scrap costly commitments to high labour or environmental standards.

“We want competition in the future, but it must be fair. Fair and free,“ EU negotiator Michel Barnier said at an event at the European Parliament on Wednesday.

“It should not be a problem for the UK to agree on a number of ground rules.”

Both sides have said they are prepared to walk away without a deal – although the economic repercussions would be significant on both sides of the Channel. – AFP