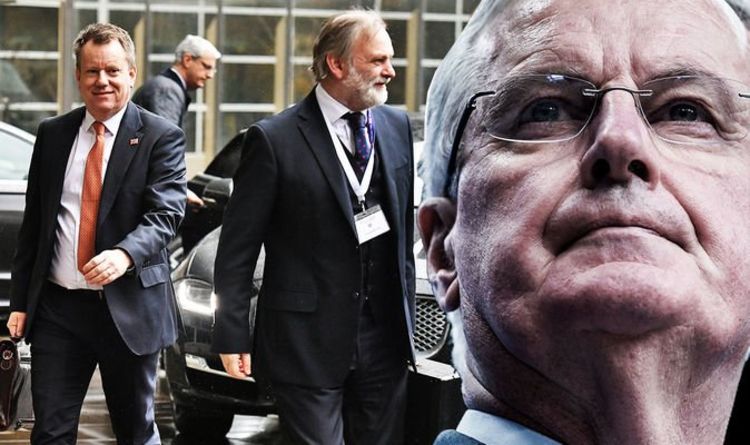 The Prime Minister’s lead negotiators David Frost gave a rousing speech to a 100-strong group of officials at the UK’s mission to Brussels before they locked horns with their EU counterparts. He told them they were in the Belgian capital to deliver on Mr Johnson’s general election pledges to regain Britain’s sovereignty from the EU.

Mr Frost proclaimed this meant under no circumstance should the European Court of Justice be handed control of UK laws.

In the first formal meeting of the trade talks, Mr Frost exchanged blows over his proposed plans with Michel Barnier, the EU’s chief negotiator.

But first they struck an early agreement for both sides to avoid handshakes with their opposite numbers in the wake of the coronavirus outbreak.

A UK spokesman said: “The UK negotiating team led by David Frost began the first round of UK-EU FTA negotiations today in a two hour meeting with Michel Barnier and Commission officials.

“The UK will engage constructively to reach a free trade agreement which fully respects the UK’s political and regulatory autonomy.”

Each British official was handed a brand new “Task Force Europe” lanyard emblazoned with the Union flag to remind them of their duties.

Tomorrow a 100-strong task force of UK officials will get down to work in 11 parallel negotiations at Square, a convention centre in the Belgian capital, because the Commission’s Berlaymont headquarters doesn’t have sufficient office space to host the talks.

The venue’s brochure says it is “steeped in history, it was once a medieval palace for the Dukes of Brabant and then a centre of European power under the Hapsburgs where Belgium’s first sovereign took his oath in 1831”.

With just an hour for lunch, due to the hectic negotiating schedule, officials will be able to enjoy Brussels’ Mont Des Art park or local delicacies of waffles and frites.

The crunch talks start amid a series of warnings overs preparations for a new no-deal scenario and a potential row over fisheries.

Top Whitehall officials have said the UK faces a “nightmare” if a fishing pact isn’t agreed with Brussels in the upcoming talks.

Ministers were told there is a “very realistic chance” that cross-Channel ports would be blockaded by EU fishing boats if no deal is reached.

Amelie de Montchalin said the issue could become a “very nasty battle” as talks rumble on.

In a stark warning, the Irishman told the Financial Times: “I am very concerned that there’s not sufficient planning in place presently.

“The last thing we want to see is a logistical nightmare for our exporters at our ports and airports through not being properly prepared.”

Mr Johnson has instructed his lead negotiator to begin plotting Britain’s course as a sovereign nation that isn’t signed up to or follows the EU’s swathes of red tape and regulations.

In the Belgian capital, Mr Barnier is comfortable with the fact that the UK will soon be abandoning the bloc’s rulebook.

He said: “It’s perfectly within the rights of the British to do that. But future access to our single internal market of more than 440 million people will depend proportionally on the extent to which there is fair competition between the two sides.

“That is exactly what we agreed with the British in the Political Declaration only a few months ago. Boris Johnson was involved in this. So, no one can seriously be surprised by the EU’s position.”