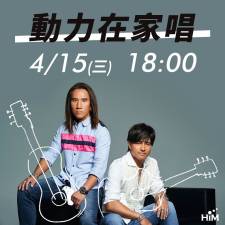 TAIWANESE rock duo Power Station will be broadcasting an e-concert, Power To Sing At Home on Facebook Live today at 6pm.

Comprising Yu Chiu-hsin and Yen Chih-lin, they are expected to perform some energetic rock anthems and also chat with their fans.

“”Free up your time. Let’s chat and sing together online,” they had posted on their Facebook on Monday.

Meanwhile, Taiwanese singer Rene Liu will be performing an online concert live on Facebook and YouTube on Friday at 7.30pm.

South Korean boy band BTS will be streaming its past concerts on YouTube for free this Saturday and Sunday at 11am. Fans can look forward to watching past performances of their concerts from 2014 to 2016, BTS 4th Muster (Happy Ever After) and BTS World Tour ‘Love Yourself’ Seoul.

One World: Together At Home

On Sunday at 8am, don’t forget to watch One World: Together At Home, a global special curated in collaboration with Lady Gaga, in celebration and support of health care worker and the Covid-19 Solidarity Response Fund for the World Health Organisation (WHO).

One World: Together At Home will be streamed online on multiple global platforms, including: Alibaba, Amazon Prime Video, Apple, Facebook, Instagram, LiveXLive, Tencent, Tencent Music Entertainment Group, TIDAL, TuneIn, Twitch, Twitter, Yahoo and YouTube. You can also tune in via Astro’s Stay At Home (Channel 700), a new pop up channel.