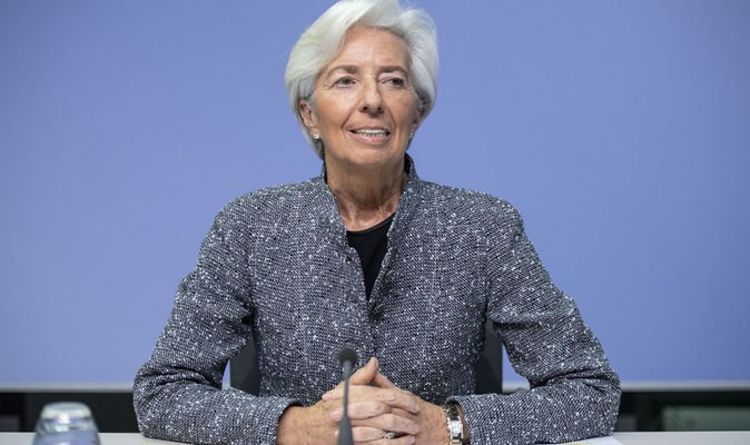 However, the cancelling out of debts has been ruled “unthinkable” by Mme Lagarde. She said in an interview with France Inter radio: “That seems totally unthinkable to me. It’s not the right time to ask the cancellation question, right now we are concentrated on keeping the economy going. Later we will look at how to pay down the debt and how to manage public finances in the most efficient way.”

She added: “The question should not be whether we can keep going – we must keep going.”

“We must understand that this crisis will inflict significant damage on all the economies of the world, including the euro zone.

“This crisis is one that is extremely brutal but temporary… It is without precedent.”

In an editorial published across several European newspapers earlier on Thursday, the bloc’s top banker said EU governments needed to support each other in order to put in place the best policies to counter the shock from the coronavirus emergency.

“Full alignment of fiscal and monetary policies – and a level playing field against the virus – is the best way to protect our productive capacity and employment… Solidarity is in fact self-interest,” she said.

Before adding: “It is vital that the fiscal response to this crisis is undertaken with sufficient force in all parts of the euro area. Governments need to support each other, so that they can together deploy the optimal policy response against a common shock for which none is responsible.”

She also stressed the need to prevent viable firms from folding and their employees from losing their jobs.

“To avoid lasting damage, we need to put the economy on hold, keeping it as close as possible to its pre-outbreak state,” she added.

The ECB, like other major central banks, has ramped up its response to the escalating pandemic, unveiling a string of emergency stimulus measures, including paving the way for potentially unlimited money-printing.

Earlier this week, the ECB agreed to further measures, easing collateral requirements so that banks could borrow more on the cheap, even if the central bank is then forced to shoulder greater financial risk as a result.

The ECB has yet to release fresh growth projections, but Mme Lagarde has said that the euro zone economy could shrink by up to 10 percent this year, its biggest drop on record, if the government-imposed lockdowns last several months.

Much of Europe is currently in lockdown, with citizens under strict orders to stay at home unless they need to buy food, seek medical care, go to work if working from home is not possible, walk their dog or take brief solitary exercise.