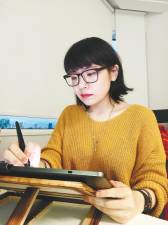 SHE always knew that she wanted to make art for a living, but life did not make it easy for Lim Su Jing (better known as Jin).

Nevertheless, she persevered and never shied away from learning and stepping out of her comfort zone. And recently, at a designer toy group exhibition, she debuted her first art figure.

“I jumped headfirst into making a figure,” said Jin. “I had been illustrating for years, I wanted to try something new. I might not be the most technical artist. But, for personal growth, I had to try new things. At the time I stumbled upon the Tun M exhibition”.

The exhibition was organised last year by Michael Chuah, who created the vinyl figure of Tun M, and HEBATTOYS who produced the figure.

The event showcased Tun M figures customised by local artists. It was held at what is now known as the Greydea Studio in TTDI.

“I’d never attended these exhibitions before. I’ve always loved designer toys. I think they are very cute and I never thought I would design one on my own. Michael’s show made it look like an art show. I didn’t think that customising was a big thing,” said Jin.

The experience inspired her to create her own art toy, the Twins.

“I sculpted the figures using epoxy. It was the first time I sculpted something I designed [in 3D]. I was inspired by a Japanese artist, and since I was not sure that I could sculpt something big, I started with something small,” said Jin.

She studied how to make the figures and drew on knowledge gained from her hobby of customising BJD Dolls. She also had a lot of help from the art toy community.

“I was so surprised by how warm the toy art industry is in Malaysia. Folks like Chuah and Gan Chuen Guan are so open to sharing what they know and are so friendly,” said Jin.

The project started as an experiment for her, not as an exhibition piece. It was all trial and error. With some help and guidance, of course.

“I had to alter my original sculpture for it to be moulded. Originally it was supposed to have sharper horns. In the end [I changed them] when Guan said that they were going to snap off,” said Jin.

“It takes time to do a new sculpt, and to make it look symmetrical takes a lot of time. When doing this digitally, there are tools to help make things even and symmetrical.

“I thought I was going to do a one-off. I struggled to do the second twin. The horns were difficult enough, but this was a whole other figure.

“Then I remembered @VomitThunder (Jonathan Edwards Liew) telling me that instead of sculpting a whole new figure, why not just cast the same one twice?

“So that’s how they became twins”.

Jin’s art toy and artwork were displayed at the My Toys 2.0 Exposure Designer Toy Group Exhibition which was held from late July until early August this year, at Greydea Studio, the same place where Jin saw her first custom art toy exhibition which inspired her to create the twins.

Currently, Jin works as a full-time illustrator. “It took me years to find out what an illustrator does,” said Jin.

“I would say an illustrator is more of a commercial form of an artist. More towards mass consumption. But, these days, thanks to social media you can be a freelance illustrator as well.”

Jin’s journey to becoming an illustrator was a tough one. She has the talent, but not the means to study the subjects she needs in order to become the artist that she wants to be. All she has known ever since she was a child is that she wants to make art for a living.

And that has motivated her to never stop learning.

“They were studying pure art using all the mediums and studying anatomy. That was what I wanted to study but I didn’t get the chance”.

Yet, she still persevered. Her talent and her friends got her jobs where she could learn first hand and where she was told that she lacked the fundamentals, despite her hard work and abilities.

Her perseverance paid off when she got to continue her studies and pursue her dreams.

“Transitioning from being a hobby artist to doing it professionally [was] a problem. My mind was set on becoming a good artist, but I did not know what I wanted to do,” said Jin.

She took inspiration from various artists and styles and tried them all. And recently she has found her groove.

You can check out her art for yourself @mehmehjin on Instagram.