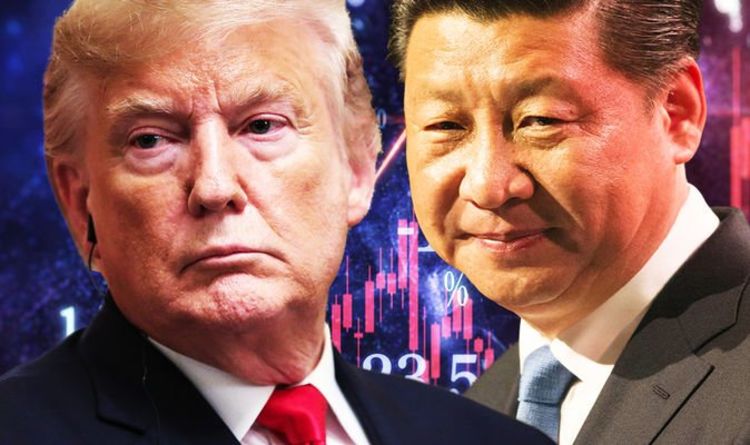 Back in January, the world’s largest economies reached a truce after two years of tariffs and trade restrictions suppressing global growth. But global trade tensions threaten the economic recovery from the COVID-19 pandemic.

A poll conducted by the Washington-based Pew Research Center has found around two-thirds of Americans have a negative view of China.

This marks the highest proportion since the think tank began the survey back in 2005.

Since the coronavirus broke out in Wuhan, China, US President Donald Trump has continually repeated speculation that the deadly virus originated in a laboratory.

Secretary of State, Mike Pompeo, also claimed China “has a history of infecting the world”.

Last week, Mr Trump threatened to “terminate” the trade agreement with China if they failed to buy $ 200bn (£162bn) more of US goods and services than in 2017.

On Thursday, Mr Trump said: “We signed a trade deal where they’re supposed to buy, and they’ve been buying a lot, but that now becomes secondary to what took place with the virus.

“The virus situation is not acceptable.”

Derek Scissors, a China analyst at the American Enterprise Institute in Washington, believes the tensions between the US and China will reach the peak in autumn, a few months before the Presidential elections.

“We suspect Trump will stick mostly to threats. If evidence did emerge of a cover-up in China, that might embolden the administration to take firmer action, particularly if other countries were willing to add to the condemnation.”

Mr Trump has continually blamed China for the coronavirus outbreak and claimed the World Health Organisation (WHO) had been covering up the outbreak with the Chinese President, Xi Jinping.

During a virtual town hall meeting at the Lincoln Memorial in Washington DC, Trump blamed China for the global pandemic and accused them of a state cover-up after making a “horrible mistake”.

He said: “Well, I don’t think there’s any question about it. We wanted to go in, they didn’t want us to go in.