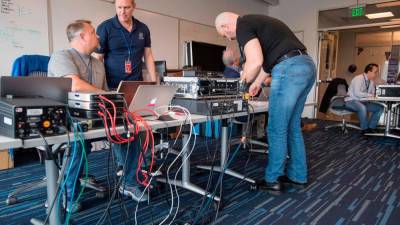 LOS ANGELES: The number of confirmed US coronavirus cases soared past 500 Sunday, including two further deaths, as President Donald Trump defended his administration’s “perfectly coordinated” response to the epidemic.

The virus has reached some 30 US states, with Oregon the latest to declare an emergency, and 60 million people in California and New York are under crisis measures.

Two more deaths were reported in Washington state – both linked to a virus-hit care home near Seattle – bringing the nationwide toll to at least 21.

In an early morning tweet Trump, who has been accused of peddling misinformation on the outbreak, blamed the media for trying to make his government “look bad.”

“We have a perfectly coordinated and fine tuned plan at the White House for our attack on CoronaVirus,“ Trump tweeted.

“We moved VERY early to close borders to certain areas, which was a Godsend. V.P. is doing a great job. The Fake News Media is doing everything possible to make us look bad. Sad!”

But Larry Hogan, the Republican governor of Maryland, criticized Trump’s messaging around the outbreak, telling NBC the president “hasn’t communicated the way I would, and the way I might like him to.”

A Johns Hopkins tally put the number of confirmed US cases at 537 by Sunday afternoon, with newly diagnosed patients in states including Pennsylvania, Illinois, Massachusetts, Connecticut and New Jersey.

Oregon declared an emergency as the number of patients in the northwestern state rose to 14, with Governor Kate Brown saying measures to “unlock” key resources would remain for at least 60 days.

Medical officers were Sunday set to board a virus-hit cruise ship stranded off California and begin screening passengers for an “unprecedented and difficult” landing operation.

The Grand Princess, which has 21 confirmed novel coronavirus infections among 3,500 people on board, is due to dock in Oakland on Monday after four days held off the coast of nearby San Francisco.

Carolyn Wright, a passenger on the Grand Princess, told AFP that people without symptoms were being allowed to leave their cabins for the first time since Thursday.

“They are starting with top floor inside cabins. The crew will be telling us how long we can stay out,“ she said.

Once ashore, ill passengers will be moved immediately to medical centers while US residents not requiring treatment will be quarantined at military bases in California, Texas and Georgia for 14 days.

Trump has been heavily rebuked for repeatedly contradicting the advice of his administration’s experts in his public pronouncements about the coronavirus.

He has downplayed the threat posed by the epidemic, which has killed more than 3,500 people since emerging in China, suggesting cases were “going very substantially down, not up,“ falsely pledging that a vaccine would soon be available and claiming without evidence that the official estimate of the death rate was “false.”

Some epidemiologists accuse the White House of a strategy concerned more with the political narrative than domestic readiness.

Chief among the complaints has been the lack of testing caused by the Centers for Disease Control and Prevention (CDC) developing its own flawed kits.

New York Governor Andrew Cuomo said federal health authorities had been “caught flat-footed” and had “handcuffed” the ability of individual states to respond.

“Their messages are all over the place, frankly,“ he told Fox News.

Anthony Fauci, director of the National Institute of Allergy and Infectious Diseases, told Fox News that the possibility of following Italy’s example in locking down large sections of the population, or even entire cities, could not be ruled out.

“You don’t want to alarm people but, given the spread we’ve seen, anything is possible,“ he said. — AFP