US could overtake Europe as coronavirus epicentre: WHO 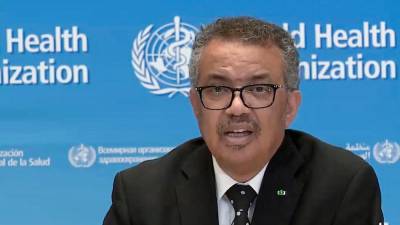 GENEVA: The Covid-19 outbreak in the United States has the potential to exceed that in Europe, the World Health Organization (WHO) said Tuesday as the number of reported US cases surges.

The pandemic began in China in December but the epicentre has since shifted from Asia to Europe.

WHO spokeswoman Margaret Harris told reporters during a virtual press conference that 85% of the new cases reported to the global body overnight had come from Europe and the United States, now the two “main drivers of the outbreak”.

The latest WHO coronavirus daily situation report – published late Monday, before the overnight figures – showed that Europe reported 20,131 new cases in the preceding 24 hours, while the United States reported 16,354, more than doubling its total caseload.

Asked whether the United States could overtake Europe as the epicentre of Covid-19, Harris said: “We are now seeing a very large acceleration in the number of cases from the US, so it does have that potential.

“We cannot say that that is the case yet but it does have that potential.

“They have a very large outbreak and an outbreak increasing in intensity.”

Harris said that due to the incubation period, the rise in case numbers reflected a surge in transmissions taking place up to five days prior.

“Each individual infecting two to three other people takes about three to five days, so we’re seeing what happened three or four days ago, or five days ago in many countries,“ Harris explained.

The numbers show that in the United States, “a week ago there was a lot of transmission”.

Despite the surging case numbers, Harris said there were also some “very big positives” emerging from America.

“Testing is being ramped up; there are more efforts to isolate, care for every confirmed case and trace and quarantine people,“ she said.

“And also a very, very strong community mobilisation. There are some extremely heartwarming and fantastic stories coming out of the US about what people are doing for each other.”

According to an AFP tally compiled at 1100 GMT Tuesday from official sources, Covid-19 has now infected more than 386,000 people worldwide, and killed nearly 17,000 of them since the outbreak began. – AFP