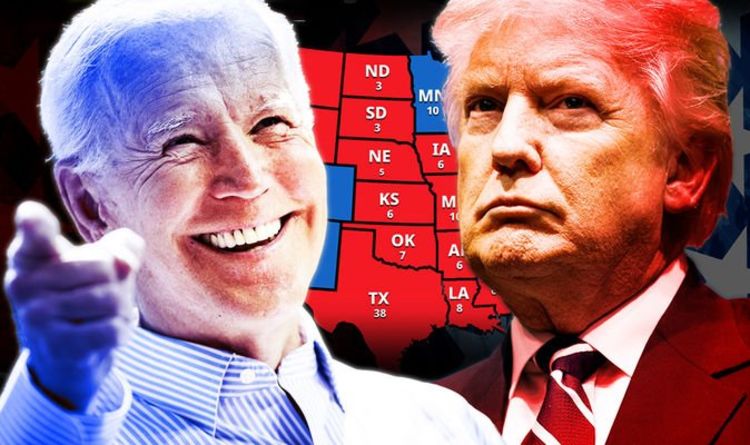 Betfair’s Darren Hughes added: “Florida is the closest in the betting. After winning it in 2016, the Sunshine State is a must-win yet again for Trump, and the odds have narrowly swung in his favour.

“The Republicans have been as short as 10/11, in May, and as big as 6/4, in September, to win there, and although the Democrats were the narrow favourites as recently as last week, early voting figures have shown the Republicans eating in to the early Democrat lead, and with Republicans historically under-polling in the state, Betfair Exchange punters have latched on, and Trump is now the 10/11 (53 percent) favourite to win the state.

“Another state Trump has been targeting in recent weeks in Nevada.

“The Silver State has swung blue in the last three elections, but with the pandemic forcing the state’s primary income driver, the gaming industry, to close down, Trump has leveraged his reopening plan to appeal to voters there, with a view within his camp that the state is up for grabs, and the odds have moved to reflect this.

“With the Democrat odds having been 1/5 (84 percent) in July, and even 1/4 (80 percent) in early October, Trump’s focus has been reflected in Betfair Exchange odds, and he is now 9/4 (30 percent) to win the state, in what would be a huge boon to his election chances.”

“North Carolina is also being closely contested on the east coast. Traditionally Republican, Trump simply can’t afford to lose these 15 Electoral College votes, but Betfair Exchange punters are suggesting he may do just that- odds of 6/5 (45 percent) to the Democrats 5/6 (55 percent) suggest Trump is up against it here.”