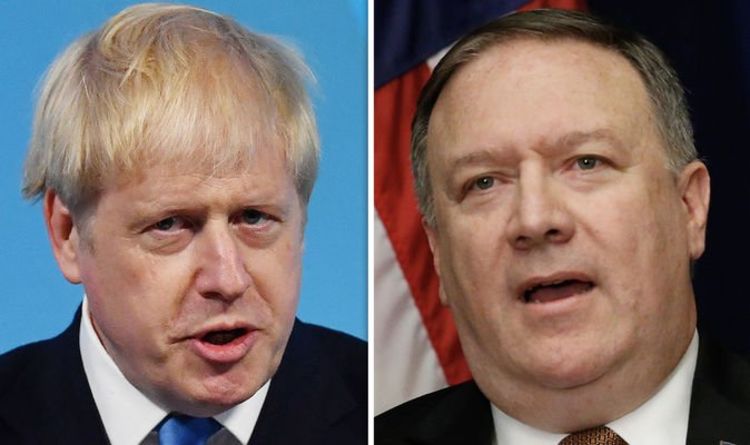 The Iranian Quds Force leader was killed by a US airstrike in Baghdad on Friday. Iran has vowed revenge as fears of open conflict in the Middle East surge.

By contrast he said America’s regional allies, possibly a reference to Israel and Saudi Arabia, had been “fantastic”.

Plans for the UK, France and Germany to issue a joint statement fell apart after the three countries failed to agree on a wording.

Mr Pompeo accused European powers of failing to realise America’s actions would save lives in Europe.

Speaking to Fox News he said: “I spent the last day and half, two days, talking to partners in the region, sharing with them what we were doing, why we were doing it, seeking their assistance.

“They’ve all been fantastic.

“Frankly, the European’s haven’t been as helpful as I wish they they could be.

“This was a good thing for the entire world, and we are urging everyone in the world to get behind what the United States is trying to do to get the Islamic Republic of Iran to simply behave like a normal nation.”

The UK’s Defence Secretary said on Saturday that the US had the right to defend itself in relation to the Soleimani killing.

Ben Wallace said: “We urge all parties to engage to de-escalate the situation.

“Under international law the United States is entitled to defend itself against those posing an imminent threat to their citizens.”

Despite growing concern from world leaders Donald Trump has argued the attack against the general is more likely to have prevented World War 3 than caused it.

President Trump added the US killing of Iran’s top military chief General Qassem Soleimani “should have been done a long time ago”.

The US president said: “We took action last night to stop a war. We did not take action to start a war.”

Mr Trump said the US was not seeking regime change in Iran, but claimed the world was a safer place without “monsters” such as Gen Soleimani.

“If Americans anywhere are threatened we have all of those targets fully identified and I am ready and prepared to take whatever action is necessary, and that particularly refers to Iran.”

ByBlake FarmerAngela Settles' husband Darius died of COVID-19, on July 4th. He was 30 years old, had no underlying conditions and was the youngest...
Read more