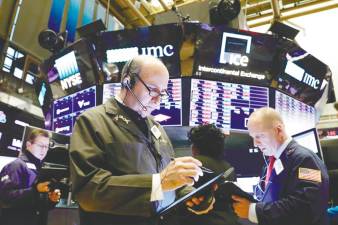 NEW YORK: Investors betting on declines in US stocks saw big profits in the last month as equities crashed while the global spread of coronavirus darkened economic prospects and net increases in short selling implying no turnaround in bearish sentiment.

Short sellers borrow shares in the hope of buying them back at a cheaper price and pocketing the difference.

US shorts saw a one-month paper profit of US$ 343.67 billion (RM1.5 trillion) from the S&P 500 and Nasdaq’s Feb 19 peaks through to March 19, according to the latest data from financial technology and analytics firm S3 Partners, which measures bets against US stocks and American Depository receipts.

“Short sellers are topping up their gas tanks … they continue to have a short bias to the market and they’re making sure they’re at the levels they want to be at,” said Ihor Dusaniwsky, managing director at S3.

“At the moment we’re seeing active short activity across 80% of the sectors which implies there’s still a negative market sentiment,” he added.

Companies in the capital markets sector such as brokerages saw short selling increase to the tune of US$ 3.2 billion while investors increased short exposure to banks by about US$ 2.6 billion. That compared with a US$ 2.5 billion increase for biotechnology.

Industries with the biggest increases in short covering were led by technology hardware, where US$ 1.4 billion worth of shares sold short were covered, and leisure products, which saw a US$ 497.8 million increase.

Pharmaceuticals and healthcare tech-nology each saw more than US$ 200 million increases in short covering.

Microsoft Corp and Apple Inc were the companies with the biggest increase in short covering during the month with US$ 1.47 billion of Microsoft shares being covered and US$ 1.39 billion of Apple shares covered.

Since Apple is expected to have manufacturing issues with much of its production in Asia, Dusaniwsky said short sellers may be taking profits in case product deliveries rebound as the China coronavirus outbreak stabilizes. Apple shares fell around 24% between Feb 19 and March 19.

ByDefund the BBC is sending the leaflets, titled “You do not have to pay”, which explain how people can “legally cancel” their TV licences....
Read more