US on the brink LIVE: Updates as local reports claim... 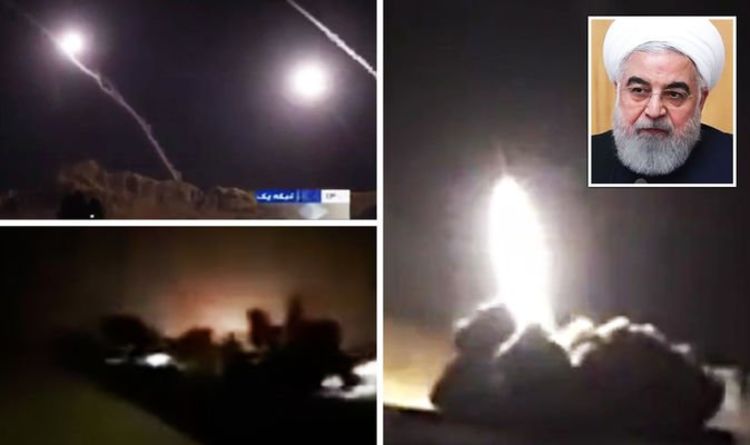 Missiles have struck multiple locations in Iraq where the US military are reportedly based. It is believed the attack is in retaliation for US President Donald Trump’s assassination of Iran’s General Qasem Soleimani.

2am update: Qasem Soleimani is buried in his hometown

Iran’s General Qasem Soleimani who was killed by the US is now being buried in his hometown after Iran retaliated against US forces.

Explosions have been heard in Baghdad according to local sources who also say that US helicopters and planes have been seen.

Top officials who met with Trump including Vice President Mike Pence and Secretary of Defence Mark Esper, have left the White House.

1.40am update: White House spokeswoman says Trump will not be addressing the nation tonight

US President Donald Trump was expected to address the US over the attacks on US troops.

However, a White House spokeswoman has now said that Trump will not be addressing the nation.

1.30am update: Iran’s military has killed 30 US soldiers in Iraq, according to local reports

Local reports claim that Iran’s military has killed 30 US soldiers in Iraq tonight.

US officials have only reported Iraqi casualties so far.

1.15am update: Iran’s IRGC issues chilling warning to the US

According to the Tasnim News Agency, the IRGC (Iran’s Islamic Revolutionary Guard Corps) said in a statement: “We warn the Great Satan, the bloodthirsty and arrogant regime of the US, that any new wicked act or more moves and aggressions (against Iran) will bring about more painful and crushing responses.”

The statement added: “We are warning all US allies who gave their bases to its terrorist army that any territory that in any way becomes the starting point of hostile and aggressive acts against the Islamic Republic of Iran will be targeted.

“We in no way consider the Zionist regime (of Israel) to be separated from the criminal US regime in these crimes.”

1.07am update: Iraqi source says there are casualties

An Iraqi source told CNN that there are casualitues among Iraqi forces at the Al-asad airbase.

However, there is still now word on US casualities.

1am update: Photo from local sources shows an unexploded missile near airport

12.57am update: Trump to address the nation later on today

US President Donald Trump is expected to address the nation later on tonight, according to CNN.

12.50am update: Pentagon confirms attack on US military bases in Iraq

“At approximately 5.30pm (EST) on January 7, Iran launched more than a dozen ballistic missiles against US military and coalition forces in Iraq.

“It is clear that these missiles were launched from Iran and targeted at least two Iraqi military bases hosting US military and coalition personnel at Al-Assad and Irbil.

“We are working on initial battle damage and assessment.

“In recent days and in response to Iranian threats and actions, the Department of Defence has taken all appropriate measures to safeguard our personnel and partners.

“These bases have been on high alert due to indications that the Iranian regime planned to attack our forces and interesting in the region.

“As we evaluate the situation and our response, we will take all necessary measures to protect and defend US personnel, partners, and allies in the region.

“Due to the dynamic nature of the situation, we will continue to provide updates as they become available.”