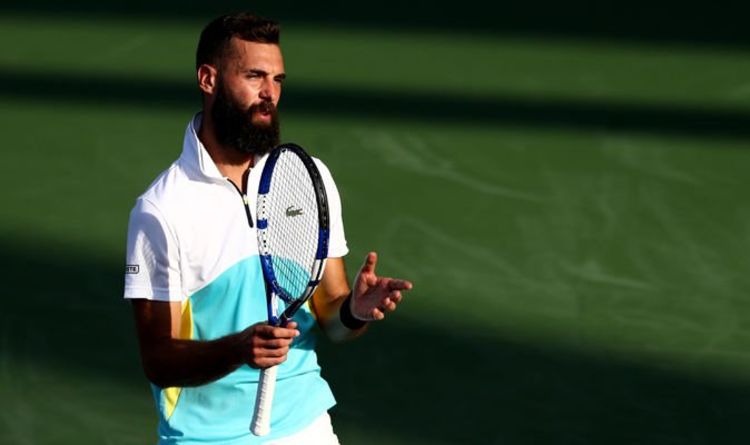 World No 22 Benoit Paire has been withdrawn from the US Open after testing positive for COVID-19. And fellow French players Richard Gasquet and Adrian Mannarino now risk also being ruled out after being ordered to self-isolate in their hotel rooms.

The US Open is being played without fans in a bio-secure bubble but top players like Rafael Nadal and Ash Barty have stayed away for health reasons.

British No 1 Jo Konta said in response to the news of Paire testing positive: “I just found out and it’s like: ‘Oh wow, really.’

“It was always going to take us by surprise and be a bit shocking and worrisome if a player tested positive.

“It doesn’t really change what I am doing on a day-to-day basis.

“Myself and the rest of the team are doing the best that we can in terms of keeping distance and trying to get on with our day-to-day things.”

No. 17 seed Paire had been scheduled to play Kamil Majchrzak in the first round on Tuesday but the Pole will now face Spain’s Marcel Granollers.

Paire, who is asymptomatic, now faces 10 days in self-isolation while those in contact face 14 days in quarantine.

Dan Evans added: “That would worry me the 14 days in the room, that is disastrous stuff, no fresh air. I will hopefully stay safe.”

Britain’s Kyle Edmund will meanwhile strive to avoid a hat-trick of first-round defeats at the US Open when he faces Alexander Bublik on Monday.

The world No 44 even lost his opening match at last week’s Western and Southern Open to Kevin Anderson.

But Edmund showed strong form reaching the final of the Battle of the Brits in June before losing the final to British No 1 Evans.

Kazakh world No 51 Bublik reached the third round at the US Open last year – his best Grand Slam performance.

British No 3 Cam Norrie, who has only ever won two matches at the US Open, faces a tough opening match against No 9 seed Diego Schwartzman of Argentina.

The world No.13 has not played on the ATP Tour since February but reached the fourth round of the Australian Open before losing to Novak Djokovic. Schwartzman, who is only 5ft 7in, has reached the quarter-finals in New York in two of the last three years.

Former world No 1 Andy Murray meanwhile gets his tournament underway with a first-round showdown against rising Japanese star Yoshihito Nishioka on Tuesday at the Arthur Ashe Stadium.

Murray, the winner at Flushing Meadows in 2012, was gifted a wildcard for the event having slipped well down the rankings after lengthy struggles with injuries.

The three-time Grand Slam champion is still fighting his way back to full fitness after pelvic and shin problems earlier this year.

If he beats Nishioka, he will take on Canada’s Felix Auger-Aliassime, ranked 20th in the world despite being just 20 years old, in the second round.