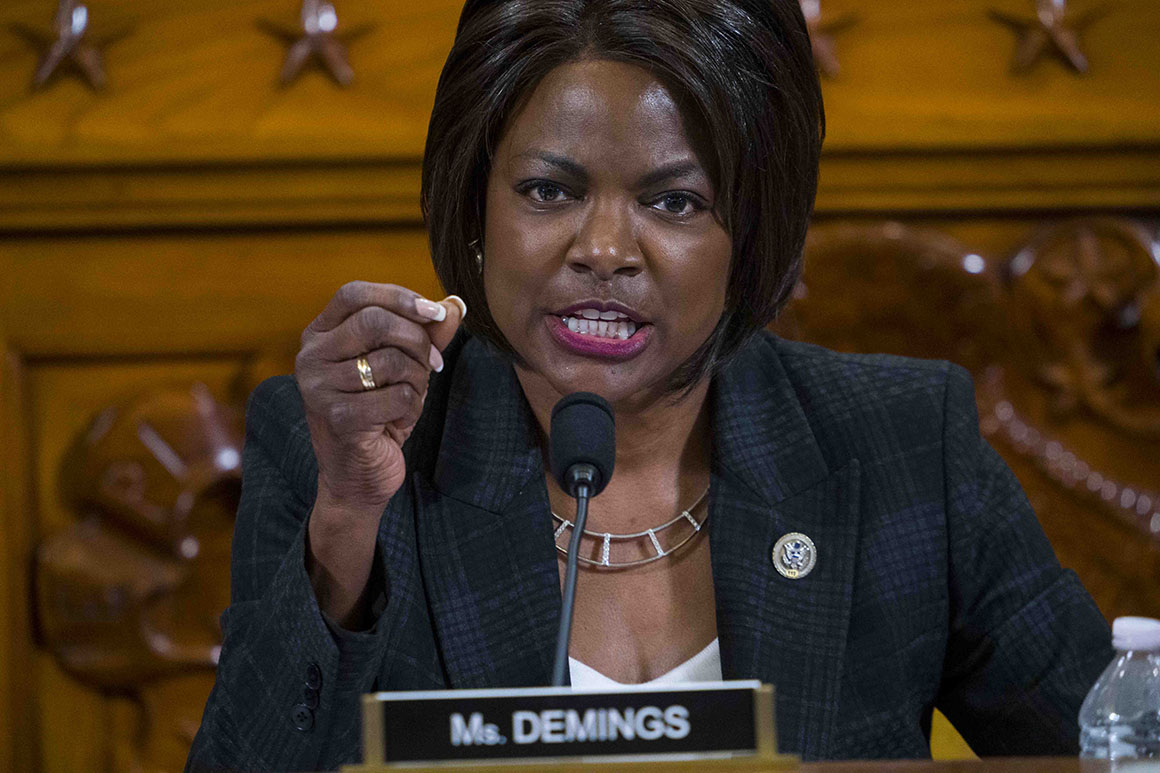 “She is one of a group of close to a dozen really qualified and talented women who are on the list,” Biden said in a May 7 interview with an Orlando television news station. “She’s a very competent, very capable person.”

First elected to the House in 2016, Demings is half of a political power couple that hails from the heart of the swing state’s swing region, the Interstate 4 Corridor, where her husband is Orange County mayor and had previously been elected sheriff.

Demings is African American — giving her an edge in the eyes of some activists and Biden backers — strong on television, and speaks in biblical cadences that can bring a black church to its feet and add a potential dose of energy to a campaign that lacks it, according to polls.

“When Val speaks, you get a lot of ‘amens!’” said John Morgan, a Biden donor and bundler from Orlando. “She’s dynamic, a tough act to follow. I try to speak before her, not after her, at events.”

As a former police chief, Demings would give the ticket a law-and-order sheen that Democrats often lack, said Morgan. Demings, a favorite of House Speaker Nancy Pelosi, also served as a House impeachment manager against President Donald Trump earlier this year, giving her a national platform to make a dry run auditioning for an essential task of a running mate: prosecuting the case against the opponent.

Demings told POLITICO that she’s honored just to be considered by Biden. She connects his campaign-trail stump speech about restoring the American dream with the story of her upbringing as the youngest of seven children who was born to a maid and a janitor and grew up in a two-bedroom house with a leaky roof but no heat or air conditioning.

“My background in Florida is pretty humble, being brought up poor, black and female in the South and being told enough times what I couldn’t do and what I couldn’t be, but I became a police chief and now a member of Congress,” Demings said in an interview. “The American Dream is alive and well if you work hard enough and you have enough people supporting you.”

While she was police chief, violent crime dropped in Orlando. But the police department has been troubled with a history of brutality, which could put the African American politician on a crash course with the Black Lives Matter movement if she’s picked. Demings acknowledged the department had difficulties and said she had instituted an “early warning system” to spot problematic officers.

In the eyes of her supporters, including some Biden advisers, Demings‘ strengths far outweigh any drawbacks.

“Val checks a lot of boxes, and the more you put it all on paper, the more she starts to score at the top of the list,” said a top consultant who has advised Biden’s campaign. “But the knock against her might be experience.”

Though she’s 63, had a career as a big-city police chief and served in Congress, that might not be enough for a Washington institutionalist like Biden.

The former vice president prizes political experience, particularly in Washington, where he served for 36 years as a senator — including two years with Barack Obama — before the then-presidential nominee tapped him to join his ticket in 2008. Biden had run against Obama briefly during the primary that year.

Drawing on his experience with Obama, Biden has made clear he would prefer a running mate tested by a major state or nationwide campaign — something the two-term congresswoman does not have on her résumé. Biden also prizes having a personal relationship with whomever his running mate would be. And Biden doesn’t know Demings well.

With such an emphasis on personal relationships and statewide officeholding credentials, the three women who ran against Biden for president — Sens. Kamala Harris, Elizabeth Warren and Amy Klobuchar — are considered the frontrunners for the post, although there’s no running tally or scoreboard being kept.

The search committee Biden recently announced is tasked with vetting about a dozen candidates, but Biden advisers say he’s going to make the ultimate decision based on “his gut” and that he hasn’t made up his mind. He plans to make an announcement by July.

When he talks about a running mate, Biden invariably focuses more on having a partner who will help him govern, rather than one who will help him win an election — an indication of the Biden campaign’s broader feeling that he’s winning the race.

House Intelligence Chairman Adam Schiff, who led the House impeachment team, said Demings is ready for the role of vice president. He lauded her past as a police chief and said she deservedly won plaudits for her role in the impeachment proceedings, where she was the only nonlawyer on the team.

“She’s brilliant, hard-working, professional and has a commanding presence,” said Schiff, adding almost incongruously that he’s not favoring any potential Biden pick. “The Biden campaign sees the same thing that those of us in Congress who have worked with her see in her.”

In Florida, Rep. Lois Frankel said other Democrats in the state delegation want her be Biden’s pick.

“I know, if asked, what I would say about Val. And what I would say is pick her,” Frankel said. “I have a feeling they’re giving her a hard look. … She’s being looked at. And that’s smart.”

Florida insiders point out that Biden would snuff out Trump’s reelection chances if the Democrat won the Sunshine State, where Trump now legally resides and where he’s devoted outsized time and resources. State polls show Biden with a negligible lead over Trump, but nervous Democrats note that Trump in 2016 narrowly defeated Hillary Clinton after she nursed similar marginal leads that evaporated on Election Day.

“Hillary picked Tim Kaine as her running mate and lost, black voters just didn’t turn out enough in Florida or Michigan or Wisconsin,” said a veteran Florida Democratic strategist. “There’s a big behind the scenes push for a black running mate for a reason. We want to win. And if Biden is thinking about governing instead of winning at this point, we’re going to lose.”

Jasmine Burney-Clark, an Orlando-based consultant who raves about Demings, acknowledged that Biden enjoyed strong black voter support in the primary, but said it’s risky to assume he can turn out enough African Americans in the general election.

“There should never be that assumption. We saw that with Hillary Clinton,” Burney-Clark said, adding that a black woman on the ticket in Florida — where about 13 percent of the registered voters are African American — “would make it much more palatable for folks to turn out with a level of comfort that we haven’t seen since Barack Obama if Biden chose a black woman.”

Buddy Dyer, the longtime Orlando mayor who appointed Demings as the city’s first woman police chief in 2007, said he did it because she was highly qualified, not due to her race or gender. But those qualities can’t be ignored, nor can the geographic realities of the Electoral College — where Florida casts 29 votes.