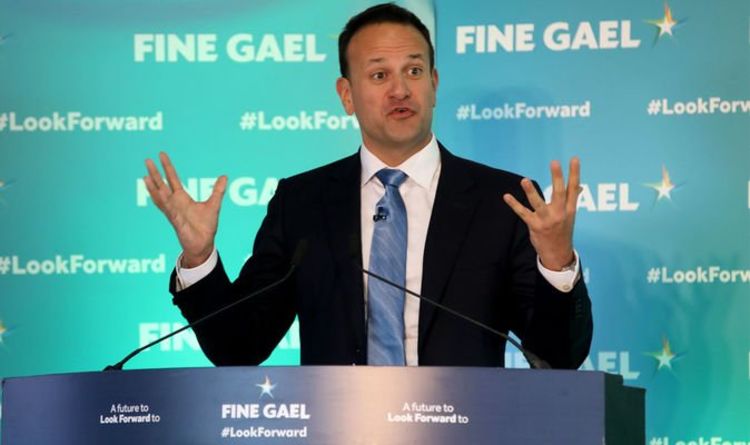 As pressure mounts on the Irish prime minister ahead of the February 8 ballot, the survey also found 55 percent of voters believe the country is going in the wrong direction. It shows that 38 percent of voters agree “the government has not made enough progress in important areas and it is time for a change”. Whereas another 37 percent agree” it is time for a radical change of direction for the country”, leaving a total of 75 percent of all voters in favour of some or radical change.

In a blow for the current Fine Gael government, which is propped up by Fianna Fail, just 20 percent of respondents agreed that “the government has made progress in important areas and deserved to be allowed to get on with the job of securing a better future”.

The Irish Times opinion poll, carried out by Ipsos MRBI, has revealed a surge in the support for Sinn Fein.

Mary Lou McDonald’s party has a popularity of 21 percent, which was up seven percent since the last poll three months ago.

Mr Varadkar’s Fine Gael on find themselves on 23 percent and the biggest opposition party Fianna Fail on 25 percent.

There is little difference in the preferred options to become the next taoiseach. Mr Varadkar finds himself on 24 percent, Michael Martin 23 percent and Ms McDonald on 20 percent.

The poll, which was taken last Thursday, Friday and Saturday, surveyed some 1,200 voters across all Dail constituencies.

If its results are accurate, Fine Gael and Fianna Fail would find it hard to form a stable government without Sinn Fein parliamentarians.

Both parties, however, have ruled out a coalition with the former political wing of the Provisional IRA.

Speaking on the campaign trail, Mr Varadkar said Sinn Fein is not a “normal party” and defended his position in the polls.

He said: “If we are in a situation where I believe we will be that we are the largest party, then we are going to want to talk to all parties except Sinn Fein about forming a Government

“We are not ruling out Sinn Fein as a potential government partner because of where they stand in the polls. That is not what it is about at all.

“It is a principled position that we are taking.

MUST READ: Irish election: What the Ireland vote could mean for Brexit Britain

“We will have another poll in another couple of days time and we don’t know what that is going to say. But the situation as far as I can see it is that this election is close.

“Fine Gael is coming from behind.”

“But it is close and it is all to play for”.