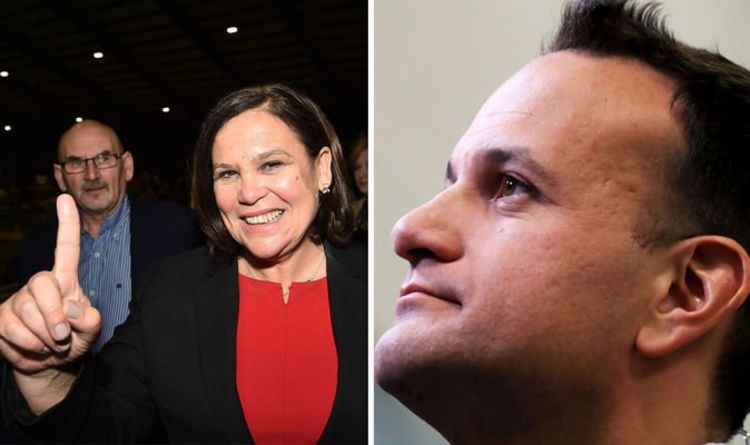 The nationalist party has exceeded all expectations, winning the highest share of first preference-votes and 37 out of 160 seats in the Irish parliament, the Dail Eireann. Fianna Fail emerged as the largest party with 38 seats, while Leo Varadkar’s Fine Gael came third with 35. Ms McDoanld immediately sought to exploit her party’s success to push for a reunification referendum.

Appearing on BBC’s Newsnight on Monday, Ms McDonald told the BBC’s policy editor, Leo Goodwin that the European Union needed to show the same support for Irish reunification as it previously did for German reunification after the collapse of East Germany in 1989.

The Sinn Fein President said: “Certainly we will be making asks of the European system in terms of long-term Irish interests and on the issue of partition.

When pressed by the BBC editor whether that meant she would be asking for that support if she became Taoiseach, Ms McDonald replied: “I think Ireland is no different.

“Yes, I think it would be correct for our allies, for our friends, for anybody who cares about this country and our people.

“It is plain to see that partition and division has been a disaster and that re-unification, reconciliation and good relationships with our next door neighbours is the way forward.”

The election campaign was fought predominately over the domestic issues of housing, homelessness and health, with neither Brexit nor Northern Ireland featuring prominently.

However, Sinn Fein said it wanted to pursue its defining agenda of a united Ireland in any future government.

He said: “I think Leo should reflect on his position, I think he’s done his best.

“He didn’t achieve what he set out to do unfortunately – I think he should step aside as leader of Fine Gael and allow a new re-building of the party from the grassroots up again.

“I believe politics is built from the grassroots.

He was joined by an army of disgruntled Twitter users who also called for the Irish premier to resign.