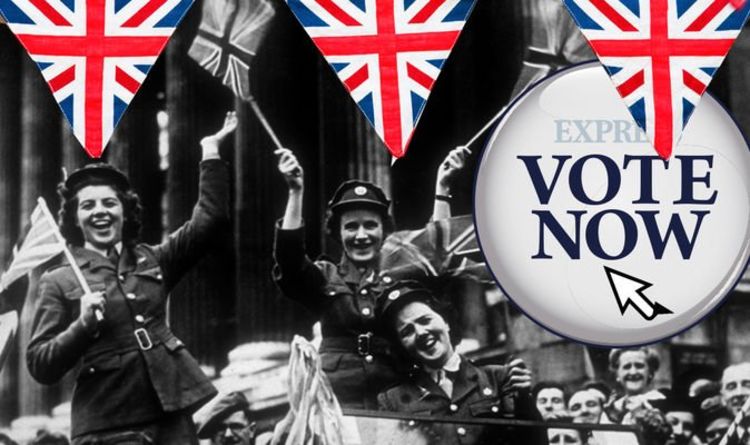 Express.co.uk readers can vote in our poll on whether VE Day should always be a Bank Holiday. The Early May Bank Holiday was last moved to May 8 in 1995 to mark the 50th anniversary of VE Day.

The UK will come together today despite the coronavirus lockdown to celebrate the 75th anniversary of VE Day and remember those who fought and died in the Second World War.

The day commemorates the official surrender of Nazi Germany to the Allied forces on May 8 1945.

While large-scale public events have been cancelled, a host of other events will go ahead.

And tributes will be paid by politicians and members of the Royal Family.

General Sir Nick Carter, Chief of the Defence Staff, said long-planned ways to mark the day had to be adapted due to coronavirus.

He told BBC Breakfast: “We will do what we can to commemorate it visibly.

“But please allow us, your proud compatriots, to be the first to offer our gratitude, our heartfelt thanks and our solemn pledge: you will always be remembered.”

A two-minute national silence will be held at 11am to honour the memories of the British servicemen and women who gave their lives during the conflict.

The silence will be led by Prince Charles and Camilla, and broadcast from a location in Scotland where they are self-isolating.

Meanwhile, Archbishop of Canterbury Justin Welby will reflect on the “courage and sacrifice” of the war generation, describing reconciliation and hope as the “two great tributes we can pay”.

And at 9pm, the Queen will address the nation in a televised message – the exact moment her father King George VI gave a speech over the radio three-quarters of a century earlier.

The nation is invited to come together in a rendition of Dame Vera Lynn’s We’ll Meet Again on BBC One following the Queen’s address.

It comes weeks after she addressed the nation over the coronavirus crisis.

The Red Arrows will also fly over London, while RAF Typhoons will appear above Cardiff, Edinburgh and Belfast as the Air Force pays its respects.