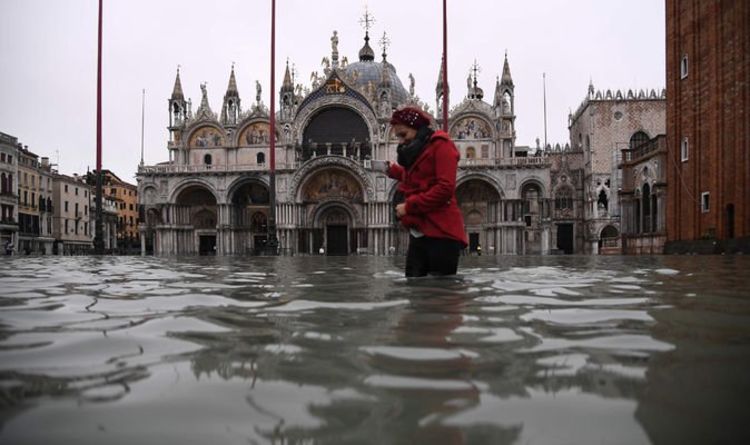 City officials said the tide peaked at 6.14ft at 10.50pm, just short of the record 6.4ft set in 1966. The city’s mayor, Luigi Brugnaro, declared a state of disaster and warned of severe damage. He tweeted that “it will be a long night”, and compared the flood to “a wound that will leave a permanent mark.”

He added: “The situation is dramatic.

“We ask the government to help us.

“The cost will be high.

“This is the result of climate change.”

Flood waters submerged the city’ central piazza, St Mark’s Square, under 3.3ft of water, while the adjacent Saint Mark’s Basilica was flooded for the sixth time in 1,200 years.

This is the fourth time in the last 20 years that the cathedral has been flooded.

The last time it was flooded in October 2018, the cathedral’s administrator claimed that the basilica had aged 20 years in a single day.

Video on social media showed deep waters flowing like a river along one of Venice’s main thoroughfares.

JUST IN: Horror rescue as desperate pensioner, 81, trapped in submerged

Many struggled valiantly through the knee-deep waters, with one French couple saying that they had been forced to “swim” when wooden platforms acting as bridges across flooded areas overturned.

Throughout the submerged city, there were surreal images of tables and chairs bobbing along alleyways in the dark, and locals and tourists wading through water with umbrellas turned inside-out.

Additionally, antique pieces of furniture could be seen submerged in low-lying hotels and homes.

The city has tried to defend itself against the ever more frequent flooding, and has invested millions of Euros in a massive infrastructure project since 2003.

But a combination of cost overruns, scandals and delays has hampered the implementation of plans, which envisage the construction of 78 floating gates to protect Venice’s lagoon during high tides.

Italy has been gripped by a powerful weather front that has brought torrential rain to all parts of the country, especially in the south.

The heavy rainfall closed schools in several southern cities including Taranto, Brindisi, and Matera, as well as the Sicilian cities of Pozzallo and Noto, according to the national weather service.

In Matera, this year’s European Capital of Culture, a tornado caused trees and lamp posts to fall, damaging numerous roofs and buildings.

No injuries have been reported, but further bad weather is forecast for the coming days.