Venus visible TONIGHT: How to see Venus alongside the Moon 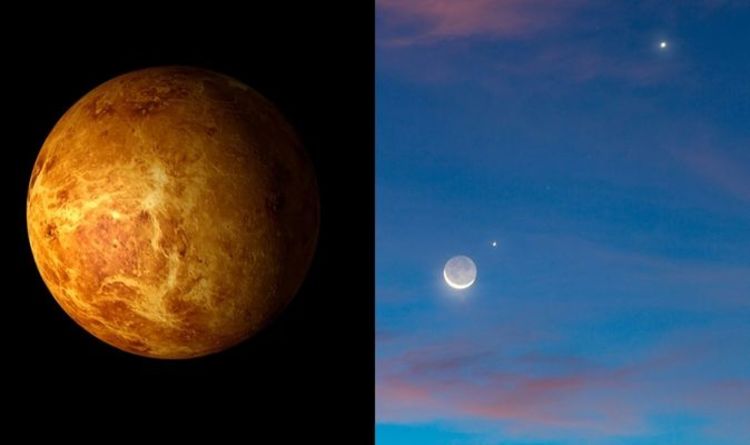 Venus and the Moon will be dancing together in the night’s sky tonight, with the planet appearing just next to the Moon. The planet, which is the second planet from the Sun after Mercury and just before Earth, is easy to spot. Express.co.uk brings you a simple guide on how to spot the planet tonight.

How to see Venus tonight

To find it, simply look at the Moon and the bright star-like object to the east of it is Venus.

Thankfully, the Moon is in a very thin crescent stage at the moment, meaning it is less bright than normal which makes it easier to see Venus.

Venus is currently the third brightest object in the sky, behind only the Sun and the Moon.

The best time to see the passing planet is shortly before sunrise.

Due to Venus having a much smaller orbit of the Sun than Earth – a full circle of the Sun takes Venus just 225 days – it will only be visible until September 15 before it zooms on ahead of us in its cosmic voyage.

Earth Sky said: “On the mornings of September 13, 14 and 15, 2020, look for the waning crescent moon and dazzling planet Venus in the eastern sky before sunrise.

“From all of Earth, they will beautify the early morning tableau.

“The moon will appear closer to the sunrise horizon each morning.

But over the course of its 4.6 billion year history, greenhouse gasses have taken its toll on the boiling hot planet – which is now even hotter than Mercury, the closest planet to the Sun.

Temperatures on Venus exceed 460 degrees Celsius thanks to volcanic activity and a thick, heavy atmosphere that is full of carbon dioxide.

At that temperature there is no liquid on Venus of any kind, making the prospect of life impossible by current scientific understanding.

However, some scientists believe humans could live in floating habitats in the clouds of Venus, with the atmosphere being a similar composition to Earth.

As a result, different sections of the Earth receive more or less sunlight as the planet rotates. This also explains why the northern and southern...
Read more