Vera Lynn: Captain Tom Moore in candid revelation as he admits 'I need to exceed her'

Dame Vera Lynn was best known for performing hits such as We’ll Meet Again to troops on the front line in countries including India and Egypt. The World War Two frontline singer, who had sold more than a million records by the age of 22, is also remembered for singing The White Cliffs Of Dover, There’ll Always Be An England, I’ll Be Seeing You, Wishing and If Only I Had Wings.

Following her death at the age of 103, Captain Sir Tom Moore has admitted that he plans to “exceed” Dame Vera by reaching 104.

The war veteran made global headlines after video footage of him walking 100 laps of his garden ahead of his 100th birthday went viral.

His walks raised £32million for NHS charities after 1.5 million people donated to his JustGiving page.

The centenarian was rewarded with a knighthood in the Queen’s first official public engagement since lockdown earlier this year.

Captain Sir Tom has since spoken candidly about late singer Dame Vera who he met during the war, while he was stationed in Burma.

Speaking about the tricks to his long life, the war veteran explained: “If I knew what the secret was, I could make a lot of money.

“I’m just lucky. I hope I can go on for quite some time, doing what I can and being as active as possible.”

Captain Sir Tom continued: “I need to exceed Vera Lynn, I’m trying to get past her at 104.”

Captain Tom Moore was recently received a knighthood from the Queen (Image: GETTY)

The World War Two veteran also dished on Dame Vera after he met the popular singer.

He added to the Radio Times: “I did [meet her], in Burma. She was a charming lady.”

Earlier this year, ahead of the 75th anniversary of VE Day and during the height of the coronavirus pandemic, Dame Vera said simple acts of bravery and sacrifice still define our nation.

Captain Sir Tom had previously admitted he had thought that Dame Vera would live even longer than she did.

“I really thought Vera Lynn would live longer, she’s been speaking so well on TV recently,” he told the BBC.

“She had a huge impact on me in Burma and remained important to me throughout my life.”

Dame Vera was remembered with a Spitfire and Hurricane flypast ahead of her funeral in June.

The We’ll Meet Again hitmaker was surrounded by her loved ones at the time of her death. 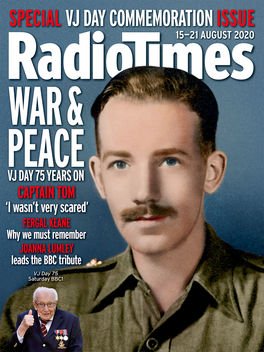 Elsewhere, Queen Elizabeth II personally knighted Captain Tom back in June despite having been in isolation throughout the pandemic.

The award was formally announced by Downing Street in May following a recommendation from the Prime Minister.

In a tweet shared by his family at the time, Captain Tom said: “I could never have imagined this would happen to me.

“It is such a huge honour and I am very much looking forward to meeting Her Majesty The Queen. It is going to be the most special of days for me.”

You can read the full interview with Captain Sir Tom Moore in this week’s Radio Times out now.

Julia Teti Kourtney Kardashian’s personal life has been front and center since the debut episode of ‘KUWTK.’ Now, we’re looking back at her romantic history...
Read more
Celebrity

Julia Teti Selena Gomez opened up to Rolling Stone about her next chapter, saying that after her 2020 album released, she wanted her fans to...
Read more
Celebrity

He explained: “When my late nephew Ben lost his sight at five years old, it brought home to me the challenges facing families with...
Read more
Celebrity

Jade Boren Travis Barker joined one of Kourtney Kardashian’s famous morning workouts at her Calabasas mansion! The Blink 182 drummer even got a shout-out on...
Read more