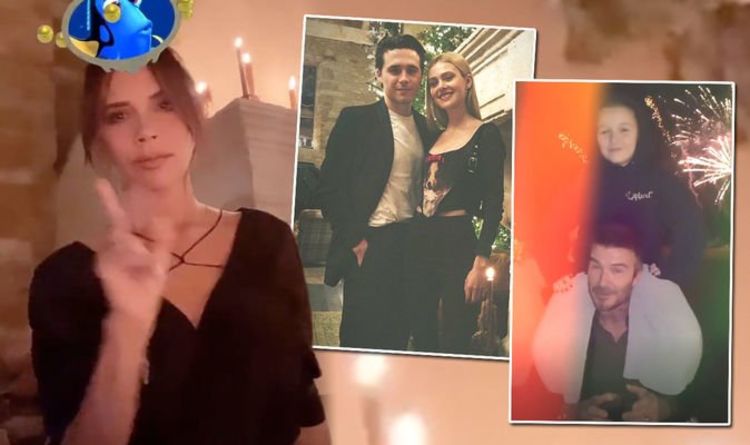 The fashionista and her sports star husband David Beckham, 44, invited a host of friends and family into their Cotswolds home to mark the start of 2020.

The couple, who celebrated their 20th wedding anniversary earlier this year, were joined by their four children Brooklyn, 20, Romeo, 17, Cruz, 14, and Harper, eight.

Victoria and David’s eldest son Brooklyn took to social media during the night to share pictures and videos from inside their New Year’s Eve party.

The well-dressed family could be seen playing games on their phones together and marking midnight with an impressive fireworks display.

Romeo and Cruz both opted for a smart shirt and tie combination for the bash, while Brooklyn teamed his black suit with a more casual white T-shirt.

Mum Victoria, who wore her brunette tresses in a stylish updo, looked lovely in an elegant black ensemble with a plunging neckline and a delicate criss-cross detail at the neck.

Adding more interest to her outfit, the designer cinched her waist in with a red belt adorned with two silver swans.

Brooklyn posted a video on his Instagram account, in view of his 11.7 million followers, which showed the family playing a game which swept the internet this festive period.

The game in question, which featured an Instagram filter, asked which Disney character are you?

Victoria was the first to give the game a go and could be seen dancing as the filter got to work, naming her as Dory the fish from Finding Nemo.

A dapper-looking Romeo was pleased to be named as a dashing prince, while his brother Cruz received Olaf, the snowman from the Frozen movies.

Brooklyn also tried the filter on his new girlfriend Nicola Peltz, who was named as Cinderella.